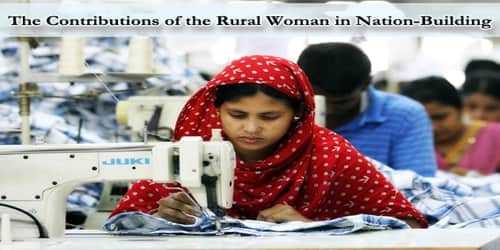 The Contributions of the Rural Woman in Nation-Building

The position of women in the past was extremely miserable. Until recently, the main occupation of women in our country was housekeeping. But today they are not merely daughters, wives, and mothers; they are policy makers, administrators, prime ministers, doctors, engineers, teachers, traders, shop-keepers and so on. In this way, they are contributing to society. In the world, women are supplying about 33% labor force. The belief about a woman was that they would remain confined within the four walls of the home. Women are the primary caretakers of children and elders in every country of the world. International studies demonstrate that when the economy and political organization of a society change, women take the lead in helping the family adjusts to new realities and challenges. They are likely to be the prime initiator of outside assistance and play an important role in facilitating (or hindering) changes in family life. If we could ensure a better environment for women to work, they would contribute more and more. A nation with illiterate masses cannot utilize the benefits of modern science. So we have to launch a campaign to remove mass illiteracy. First, we should remove women’s illiteracy. The socio-economic Condition of our women should be improved and made much better. Of course, they are participating in various kinds of work like administration, engagement in political, social, cultural work and so on. The crying issues for women are the lack of social security and dignity. They are still being repressed for dowry. I can quote a wise saying that half of the development of the world was done by men and the rest was done by women.