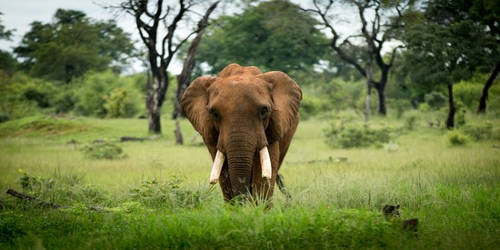 Introduction: The elephant is a large four-footed animal. It is on the biggest land animal found on earth. It is the largest of all animals on land.

Description: The elephant has four legs each like a pillar. All the four legs of an elephant are as huge as thick pillars of a huge building. It has a long trunk does the work of hand and nose. It has two white tusks on both sides of its trunk. Its head is large and round but its eyes are very small and the neck is short. It has two ears and they look like windowing fans. It has two big ears that go on moving to and fro like a big fan. It has a short tail with a tuft of hair at the end. It is generally of ash color and its skin is rough and hard. It is about ten feet high. The female elephant has no tusk. The elephant has no hair on its body. It is a wild animal but after giving training it becomes a useful animal for man. The elephant is perhaps the strongest animal in the world.

Kinds: There are generally two kinds of an elephant- the wild elephant and the same elephant. At first, wild elephants are caught and then they are tamed. It is very intelligent and obedient. They are very unique and fascinating animals.

Food: The elephant eats grass, grain, branches of trees and fruits. They live in herds. They eat small twigs, straw and wild fruits. A pet elephant also eats bananas, bread, and sugarcanes. They are pure vegetarians.

Habit: Wild elephants live in herds in the forest. Tame elephants are \try gentle and obedient. They are very intelligent too. They know how to punish their enemy. Sometimes they fight with tigers and lions. Tame elephants serve men in various ways. Elephants migrate seasonally according to the availability of food and water. Memory plays an important role during this time, as they remember locations of water supplies along migration routes. Elephants can live to 80 years of age or more in captivity but live to only about 60 in the wild.

How caught: Wild elephants are caught by means of Kheda. Besides this, there, are also other means. Many elephants are killed to produce goods from them. Moreover, many of them are ill-treated and even tortured in zoos, circuses, etc. This practice needs to be stopped. We must raise awareness about this issue of animal abuse.

Usefulness: People ride on elephants. Hunters ride on their back and hunt tigers. In the past elephants were used in war. Elephants also carry heavy things. They are used in falling trees, lifting logs, pushing them into rivers. They actually help the environment by acting like a bulldozer and knocking down useless dead trees. In circus also elephants play very important roles. Many valuable things are made of their bones and tusks. Even after its death, an elephant is useful. Bangles are made of its bones and tusks. They are very helpful to man.

Conclusion: Animals are our fellow inhabitants on the earth. The elephant is a useful animal. So, we should try to preserve it. It is our duty to take care of them. Thus an elephant is really a boon for mankind. The elephant is called a Royal animal.