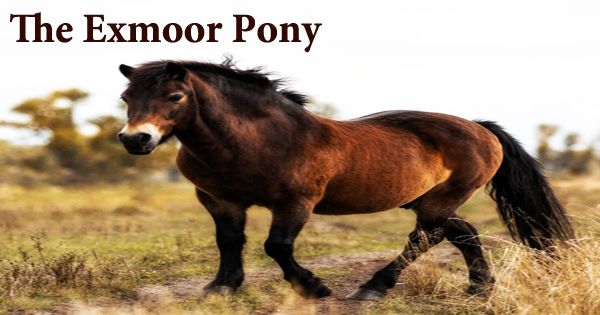 The Exmoor Pony is the oldest and most pure of the native pony breeds in the United Kingdom. It can still be found in the moorlands of southwestern England as free-roaming, semi-feral animals, helping to manage chalk grasslands and heathlands. Ponies raised in semi-feral environments are also used in a variety of equestrian events due to their hardiness. The Rare Breeds Survival Trust has designated the Exmoor as “endangered,” and The Livestock Conservancy has designated it as “threatened.” It is a mountain and moorland pony breed native to the British Isles, with conformation close to that of other cold-weather pony breeds. For generations, ponies have roamed the bleak, open moorlands of southwestern England known as Exmoor. They are thought to be direct descendants of the horses that walked into the island of Britain before it became a nation. The Exmoor Pony of today bears an eerie resemblance to archeological evidence dating back over 60,000 years. The Exmoor pony is a hardy breed that can be used for a wide range of equestrian sports. The appearance of the breed on Exmoor in its free-roaming condition contributes to the protection and management of many natural pasture ecosystems. Between 100,000 and 200,000 years ago, the first wild ponies arrived in Britain, wandering through a swampy plain that would later become the English Channel. They became very successful in Britain, living alongside Mammoths and being preyed upon by saber-toothed tigers, wolves, and bears. With the advances and retreats of many ice ages, their presence in Britain ebbed and flowed. The Rare Breeds Survival Trust has designated the Exmoor as an endangered breed. They’ve evolved to live on poor quality moorland grazing and can make good all-around family ponies, capable of carrying adults, but some have a reputation for having odd personalities.

Horses were used for transportation in the southwest of England as early as 400 BC, according to archeological findings, and Roman carvings depict ponies that are phenotypically similar to the Exmoor pony. Natural selection has created a pony that can survive in a harsh, wet environment without food or shelter provided by humans. The snow-chute, a group of short course hairs at the top of the tail designed to channel rain and snow away from the body, and the hooded-eye, a thick upper brow to shield the eyes from wind and rain, are two features unique to the breed. They come in a variety of colors, including bay, brown, and dun, and have distinctive mealy markings on the muzzle, around the eye, and on the flanks. The brow is wide, the eyes are large and prominent, the ears are small, and the jaw is deep. The ribs are well sprung and the body is deep. The legs are clean and short, with well-developed joints and plenty of bone. The hooves are well-shaped, neat, and rough. Their action is straightforward and unaffected by animation or sweeping. Stallions and geldings should be between 11.3 and 12.3 hands tall, while mares should be between 11.2 and 12.2 hands tall. Ponies weigh between 700 and 800 pounds on average. The Exmoor pony has a long history of being used by hill farmers for a variety of tasks, including shepherding, ploughing, harrowing, and transporting feed to stock and the farmer’s family to market and church. Exmoor ponies were first recorded in the Domesday Book in 1086, after which there is little historical evidence. Exmoors were mixed with other horses from 1820 to 1860, but the offspring were not as strong as their ancestors. The National Pony Society began recording Exmoor ponies and their crosses in the late 1800s. The Exmoor Pony Society was founded in 1921 and published its first breed register in 1963. Small herds of Exmoor ponies were developed in various parts of England in the 1990s. Many nature reserves are maintained by organizations like the National Trust, Natural England, and County Wildlife Trusts, and these herds are used to preserve vegetation on them. Exmoor ponies fit in beautifully against the moorland backdrop of mixed heather, grass, and bracken. The mealy muzzle and mealy eye ring can help to conceal the predator’s movements by breaking up the outline of the head. The extra fleshiness of the upper brow, known as the “toad eye,” acts as insulation and protects the Exmoor pony from the elements. The coarse hairs on its tail, known as an “ice tail” or “snow chute,” are built to deflect snow and rain away from its body. Pre-domestication mtDNA haplotypes are common in the Exmoor pony, but they can also be found in other breeds around the world. Exmoor ponies are rarely used for work nowadays, but they are used in every area of equestrian activity in the United Kingdom, including exhibiting, riding, walking, jumping, long-distance riding, and riding and driving for the disabled. Their size and strength make them ideal for driving, but they also necessitate a skilled child rider rather than a beginner. Exmoors enjoy working, are fast learners, and have cat-like jumping abilities.