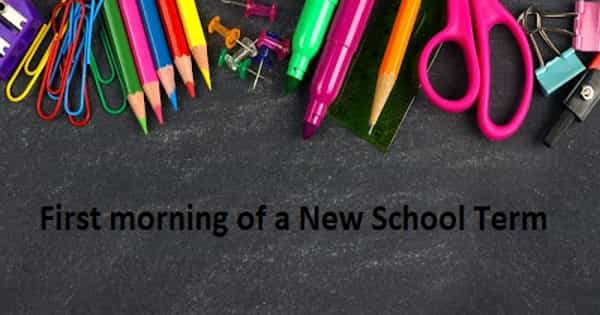 This speech is about students on the first morning of a new school term, before the start of the first lesson. SSV Beta Orion is located on a quiet lane in a residential neighborhood. It is a typical neighborhood school, with the majority of the students coming from the surrounding residential area. There is always a traffic jam on the first day of school before the school opens at 7.30 a.m. Parents drop off their children near the school’s main and side gates or attempt to enter the adjoining car park. Taxis are also visible because the school is located several kilometers from the main road.

The air is still crisp at this hour, and the sounds of birds and the first rays of warm sunlight herald the start of a new day. The older teenage students in Form Three and Four are distinguished by their taller frames and the fact that the boys wear long sleeves while the younger students wear short sleeves. Uniforms are white, with a red tie worn by prefects on duty every now and then.

The familiarity of the older boys and girls with the school also distinguishes them. They do not exude the nervousness that Form One boys and girls do when they are in an unfamiliar and new environment. The seniors, on the other hand, appear at ease, despite the fact that it is the start of a new year. The older girls congregate in groups along shady corridors, while the boys can be found on the car porch. The girls are making small talk, gathering news and feedback on what is going on at school, or keeping up with what their friends have been up to during the holidays. The older boys would be more likely to discuss current events or the latest fad. Quite a few boys are casting glances at the shiny new cars which belong to some teachers.

It is easy to identify newcomers at school. Secondary One boys and girls are gathered in the canteen with some parents. The anxious and curious expressions on their faces indicate that they are unfamiliar with the school. Because they are unsure of what to bring, the majority of these students are also carrying heavy school bags.

The canteen itself is waking up. Food stall owners are hard at work preparing ingredients to cook for the students during their midday break. The teachers are all gathered in the staff room, frantically assembling their lesson materials or catching up with colleagues about their vacation plans. The office is buzzing with activity, and some worried parents are waiting to speak with the department heads about admissions.

The school bell rings at 8.30 a.m. The older students quickly fall into neat rows and lines on the school quadrangle. Teachers are positioned behind the students. The new students are escorted to the hall on the first floor by some teachers and prefects.

The sun is shining brightly on the quadrangle at this time. The principal ascends the podium, greets the teachers and students, and turns to face the flagpole. The Malaysian flag is then raised as the National Anthem is played. Everyone sings the familiar strains of the song that they have memorized. Following that, the vice-principal makes announcements and reminds students to be disciplined and follow school rules. The assembly is then adjourned, and the students file quietly back to their classes. This marks the start of the school’s new school year.