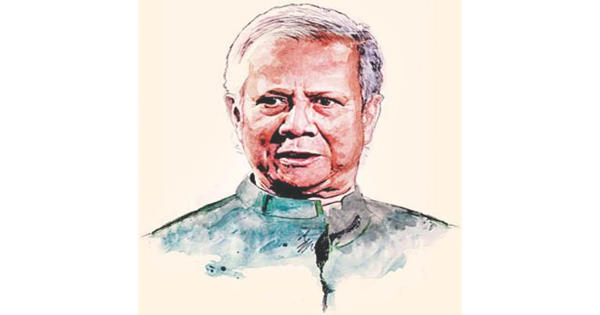 Dr. Muhammad Yunus is the visionary and developer of the unique micro-credit concept. He is a Bangladeshi social entrepreneur, banker, economist, and civil society leader who was awarded the Nobel Peace Prize for founding the Grameen Bank and pioneering the concepts of microcredit and microfinance. He is the founder of the Grameen Bank. To eradicate poverty, he has contributed a lot. He has advanced forward to help the landless and poor people of the country. So, he is called the banker of the poor. It is a matter of joy that he has recently been awarded the Nobel Prize, the most prestigious prize in the world.

Dr. Muhammad Yunus was born in an obscure village named Bathua at Hathajari in Chittagong district on 28th June 1940. His father’s name was Hazi Muhammad Dula mia and that of his mother, Sufia Khatun. Hazi Muhammad Dula mia was a jewelry merchant. Br Yunus was the third of 14 children of his parents. Although he came from a well-off family, Yunus was admitted into a village primary school named Mahajan fakir primary school in 1945. After that, he studied at Chittagong collegiate school and Chittagong College. He completed his graduation and post-graduation in economics from Dhaka University. After completing post-graduation, Dr. Yunus went to the USA and received his Ph.D. degree from Vanderbilt University in 1969 after getting a full bright scholarship. After completing his Ph.D. degree, dr Yunus did some teaching at Colorado university in the USA. Returning to Bangladesh, he joined as a professor of economics at Chittagong University in 1972. The area of Chittagong University is situated in a rural area of Hathajari Thana where most of the people were five by hardship. 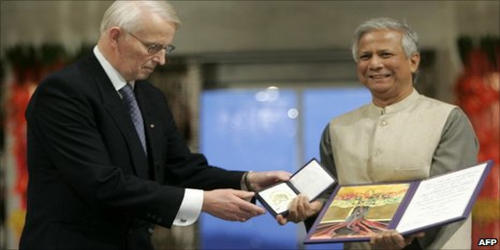 Sometimes, dr Yunus went to our university campus and met poor villagers. He was moved to see the miserable condition of them. Then he made up his mind to do something well for them. He discovered that very small loans could play a significant role in a poor person’s ability to survive. The first loan he gave that was of 856 taken from his own pocket. He lent it to 42 female basket weavers in the village of Jobar near Chittagong University.

In 1976, Yunus launched the activities of Grameen bank and started giving loans to poor Bangladeshi against the advice of banks and the government. He carried on giving our micro-loans and in 1983, he officially formed the gram bank on the principles to trust and solidarity. In 1997, professor Yunus led the first micro-credit summit in Washington DC. It was our long-cherished desire that one Bangladeshi will get a Nobel Prize and we shall feel proud of him. At last, the dream of the whole nation has come true and Dr. Yunus and his brainchild Grameen bank jointly won the Nobel Prize for promoting peace in 2006.

Although Muhammad Yunus received over 650 different national and international awards before winning the Nobel Prize, it is the greatest achievement among them. Besides Grameen bank, he has created a number of companies in Bangladesh to address the diverse issues of poverty and development. In fine, we can say that dr Muhammad Younus is the symbol of world peace and prosperity. Bangladesh feels proud of Professor Yunus, the sparkling star of the land.