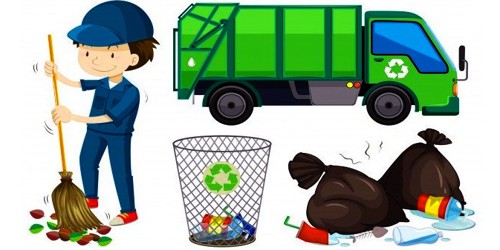 A garbage collector is someone who works either for the municipal government or for a private waste management company. It is incredible how much rubbish we throw into the garbage bin. It always seems to be full. A garbage bin is never nice to look at and get near to. The smell can be quite strong. So we are very thankful to the garbage collectors who come and remove the garbage. Garbage men protect the environment by collecting the trash and also recycling it. They do a variety of tasks that help the environment, even if it causes them harm.

Garbage collectors have a variety of tasks to accomplish throughout their workday. They normally come thrice a week. If they miss a day or two, then the garbage bins in my neighborhood overflow onto the road. This invites stray dogs and other scavengers. Only when the garbage truck comes again is the problem taken care of. So we can see how important these garbage collectors are.

When they come, they usually make a lot of noise. Often they are moody. They usually work in pairs, picking up and removing waste, recyclable goods from residential, commercial business centers, and public parks. We bear with them because theirs is not a very pleasant job. It is dirty and smelly. Besides, God knows what sort of rubbish they have to handle every day. How they can stand the filth and stench I do not know. Perhaps they are used to it. I know for sure that they do not love their jobs. Who would?

Garbage collection can be a very dangerous and unpleasant occupation. Nevertheless, they do come regularly to perform an important job. On festive occasions, we give them gifts, usually small amounts of money, as a token of appreciation for a job well done. Hazards include falling objects from overloaded containers, broken glass, syringes, asbestos; inhaling dust, diseases from solid waste, poor weather conditions, and odors so foul that they can make the garbage collector physically sick. Granted they are noisy, dirty and sometimes cranky, but how else can they behave when they have to do work that most people would not touch? Nobody would like to work as a garbage collector.

Garbage collectors are often looked down upon in our society because it’s considered to be a “dirty job,” but most people don’t know they help us and our environment more than we give them credit for. Anyhow someone has to do the dirty job. Most garbage collectors work during early morning hours, and occasionally need to interact with the public. The least we can do is make their job easier by keeping our garbage in proper bins and showing them a little appreciation now and then. Without garbage collectors, the world would be a filthy place. So we are very thankful to the garbage collectors who come and remove the garbage.