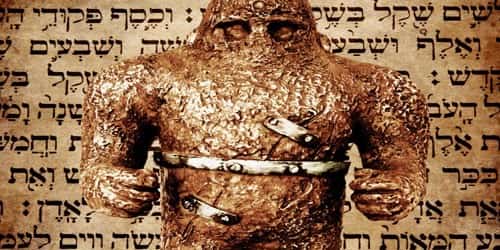 The Golem (A Jewish Tale)

Rabbi Judah was a holy man who lived in peace in the city of Prague. As time passed, Rabbi Judah became more and more distressed by the way in which his people were treated.

The Jews were often accused of the most terrible acts, and always it was a Jew who was punished when any crime was committed. Whenever a Jewish man or woman was wrongly accused, Rabbi Judah went to court to offer evidence and arguments, demonstrating the accused’s innocence. But nothing Rabbi Judah did or said mattered. The judges always pronounced guilt upon the Jews.

One night Rabbi prayed, “Lord, help me to stop this injustice.” He placed some paper beneath his pillow and fell asleep. When he woke at dawn, he found this message on the paper:

(begin ital) Make a man who will help you. He will do everything you ask him to do, but you must destroy him once he has fulfilled your wish. (end ital)

That night Rabbi Judah went to the countryside beyond the city walls, and thereby the river formed a figure of a man in the muddy clay. He wrote the secret name of God upon the man’s forehead and prayed over his creation. As darkness fell, he went to sleep beside his figure.

At dawn, the man-made clay came to life. Rabbi Judah placed his hand on the creature’s forehead. “You are the Golem,” he said, and together they returned to the city.

Not long afterward, a wealthy baron who lived nearby reported his stepdaughter missing. “She has been killed by the Jews,” the baron charged. “You must punish them.”

The officials arrested four Jewish leaders and brought them to trial. The judge listened as the baron brought his evidence. “My wife has left her castle to my beautiful stepdaughter, but the Jews want to own the castle and so they have killed our child.”

The accused men protested. “We have no wish to own the castle,” they argued. “We did not harm the child. We would never harm a child.”

“Guilty!” the judge declared. “You are sentenced to death.”

But just as the judge pronounced his verdict, the doors to the court flew open, and the Golem strode in. The people gasped, for they had never seen such a huge, strange-looking creature, but their gasps turned to sighs of relief as they saw what the Golem carried.

“It’s the child!” somebody cried, and sure enough, the Golem held the child in his huge arms. When she saw the baron, her stepfather, she began to weep. “Father, why did you lock me in the cellar?”

With an anguished heart, the baron admitted that his greed and desire for the castle had led him to commit this awful crime.

The judge ordered the Jews freed, and Rabbi Judah thanked God for sending the Golem to the people’s rescue.

“Now,” the Rabbi said, “I must destroy the Golem, for he has done his work.”

The rabbi knelt over the sleeping creature, but when he looked upon the name of God written on the Golem’s forehead, his heart grew soft. “No, not yet. He is big and strong, and his heart is pure,” he said to himself.

And so the Golem stayed, helping with the daily chores. Sadly, he seemed to be unable to stay out of trouble. When he filled the water tanks, he did not know when to stop, and he flooded the fields. He woke in the middle of the night and wandered through the streets. When people saw him, they ran, for he did not behave like an ordinary man, and never stopped growing. When he came upon a table of food, he ate everything in sight, including the plates and glasses.

Finally, the people begged Rabbi Judah to destroy him.

The Rabbi knew he must obey God’s command. That night he gave the Golem wine to drink. Once he had taken a sip, the Golem could not stop drinking. He drank barrel after barrel until, at last, he collapsed and fell asleep. With a damp cloth, Rabbi Judah erased the name of God from his forehead. Then he bent over the creature and prayed, promising never again to disobey the Lord’s word, and the Golem turned to dust.

But the Rabbi knew that one day the Golem might be called upon again to help his people.