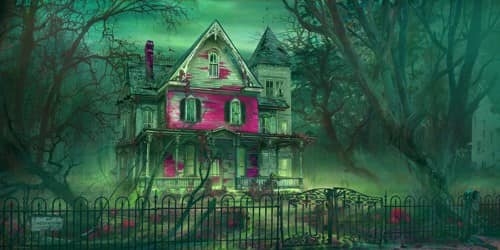 High upon a lonely hill surrounded by a great dark forest, stood an ancient, crumbling manor, known as the Haunted House. Everyone says that the old house at the end of the road is haunted. It used to be the residence of a rich family but now none of them would stay there. So the house is vacant and uncared for. The compound is filled with overgrown weed and grass.

My friend (Name) and I decided to find out once and for all if what people said was true. So one evening, we bravely entered the house and prepared to spend the night there. The front gates were as old as the hills. We brought along a powerful torchlight, two sleeping-bags, some food and drinks, and a portable stereo set.

There must be something special about this place that makes people’s imagination inhabit them with ghosts, poltergeists, and other supernatural beings. The early part of the night was no trouble at all. We sat on our sleeping bags and listened to our favorite music.

Twelve midnight came. We felt a bit sleepy. So we switched off the stereo set and crawled into our sleeping bags. However, sleep was impossible. There seemed to be a heavy atmosphere hanging around us. The darkness was oppressive and there was a strange soft whining noise coming from upstairs. The weather became cold and when he looked towards the trees, it looked as if they were alive.

We dared not go up to investigate the noise. So we lay quietly in our sleeping-bags and hoped that the noise would go away. But it would not go away.

Actually, it got louder and louder. Then it sounded like someone moaning. Jack hurried out of his sleeping-bags and switched on the torchlight. We could see nothing except the walls of the empty living room we were in.

Suddenly there was a loud crash from upstairs and the moans turned to screams. We screamed too and ran out of the house as fast as we could, leaving behind everything that we had brought. The hair on the back of my head stood on end for hours afterward.

We never dared to go back into the house, not even in the daytime. My uncle had to go and retrieve the things we had left behind there.

So, is the house haunted? All I can say is that if you want to know, go and find out for yourself.