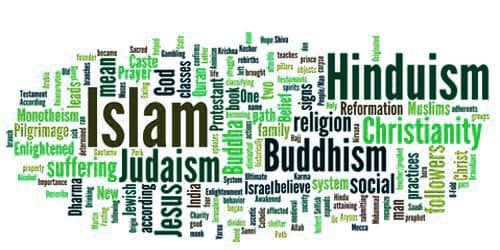 The Influence of Religions – an Open Speech

The Influence of Religions – an Open Speech

Religion is the first sense of community. It is impossible to deal with more than four or five aspects of the influence of religion on the life of man – and these, of course, must be connected with the main world-religions excluding primitive, animistic beliefs and practices encountered in the most backward societies. Considering Buddhism, Christianity, Islam, Hinduism, Confucianism, and Judaism, we find that religions have influenced every aspect of the life of man. When religion is not influential in a society or has ceased to be, the state inherits the entire burden of public morality, crime, and intolerance.

Among the early Jews, religion not only ‘influenced’ government, but it was also the government. Palestine, until the 8th century B.C. was ruled by ‘Priests-Kings’ who claimed divine sanction for all their decisions. Their appointment was a religious rite. And this has more or less influenced the Western theory of monarchy ever since. The theory of the ‘Divine Right of Kings’ was formally propounded in Britain in the 16th century, based on New Testament social philosophy. But of course, the temporal and spiritual functions of government had long since been separated between Pope and Emperor, King and Archbishop, and the relations between these have shown all the ‘ups and downs’ one might expect in subsequent history. In most countries today, the government is carried out on democratic lines, the monarch retaining little more than a strong ‘influence’ and powers of sanction and veto.

Religion has, as a result, played an important part in the foreign affairs of countries. The faithful Muslim has always been permitted to take up arms in the defense of his religion or to further its cause. The outcome has been warring against the Jews and the Christians. The Christians, likewise, considered it their duty to oust the Moslem Turks from the ‘Holy Places’ of Palestine in the middle ages, and long-drawn-out ‘crusades’ were the result, costly in manpower, wealth and goodwill to both sides. Occasionally, the war was on a religious issue such as Protestantism versus Roman Catholicism. The Spanish Inquisition, as a part of the counter-reformation, forcibly attempted to ‘Convert’ Protestant prisoners to Catholicism for the ultimate good of their own souls! Religious massacres have been commonplace in India in the past, and it says much for the democratic spirit of the New Malaysia that, today, Christians, Muslims and Hindus are able to live together in harmony. The theories of marriage and general conduct in social life also stem from the teaching of the respective world-religions and have become a fixed part of the pattern of life where they apply.

The most important influence of religion is upon morality. Modern law is based on a mixture of Roman law and religious principles. Its sanction is authority. The moral law, which is behind national and international legal systems, has behind it the final sanction – the Will of God. In this connection, each world-religion has made its own individual contribution to the sum-total of world morality, despite the fact that certain moral precepts are held in common by them all. If we look to the Muslim faith, we find there admirable teaching about self-discipline; to the Hindu faith, about non-violence; to the Christian faith, about love; to the Buddhist faith, about contemplation and to Confucianism, about duties to society and the family. The most important commonly-held piece of teaching is that we should behave towards others as we should wish them to behave towards us.