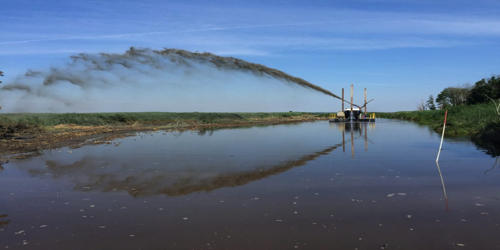 The Necessity of Canal Digging

The Necessity of Canal Digging

Canals are waterways channels, or artificial waterways, for water conveyance, or to service water transport vehicles. The digging of canals is very essential for us to supply water for irrigation. It can be thought of as an artificial version of a river. While the advent of more efficient forms of transportation has reduced the need for canals, they still play a vital role as conduits for transportation and fostering global commerce. Without irrigation, we can never think of achieving self-sufficiency in food. Irrigation can only ensure the increase in food production to meet the demand of the increasing population. Irrigation cannot be successful without a sufficient supply of water. But irrigation programs are started in the dry season when the rain is very scarce and the water of rivers and canals dry up. In most cases, the engineered works will have a series of dams and locks that create reservoirs of low-speed current flow.

Bangladesh is a delta. Most of the rivers carry silt from the upstream from time immemorial. As a result, most of the rivers have become over silted. Canals with sources of water at a higher level can deliver water to a destination such as a city where water is needed. Heavy rainfall during the rainy season causes the rivers to overflow their banks. The rise of water crosses danger level and there is a flood almost every year in Bangladesh. This causes heavy damage to crops in Bangladesh.

A canal is a manmade waterway that allows boats and ships to pass from one body of water to another. Today irrigation is essential for our agriculture. In the primitive age, men chose moist land for cultivation. But with the increase in population moist land has become scarce and less available. So, farmers have begun to irrigate dry land for cultivation. They make efforts to make dry land moist by supplying water from canals, rivers, or ditches. In this way, the irrigation system has come into use.

Two main sources of water can be helpful for the success of our irrigation. These are water from rivers and water from canals. But as a matter of fact, because of our rivers being silted, the alternative source of water is the canal. Groundwater level does not go down on account of canal irrigation, but on the contrary water level increases, which facili­tates digging of wells. Under this circumstance. Bangladesh should exploit the source of water from digging and re-excavating the canals for the overall success of her irrigation.

The government has decided to produce maximum crops during the dry season from November to April. The period is very dry. There is a scarcity of rain at that time. The best way to solve this problem is to make an intensive program of canal digging. Canals are fed by rainwater received by rivers, and the water is used for irrigation. Production of crops needing more water is also possible through canals.

The northern part of Bangladesh is very dry due to the building of Farakka Barrage and the lack of proper share of water from the Ganges. As such, the government machinery has concentrated its major attention on this part. The Agriculture Department has taken special care to use fertilizers, insecticides, and proper use of water from canal digging for irrigation. Canals are also used to transport water for irrigation and other human uses.

We must make the canal digging program a success at any cost for our existence. Otherwise, we will not be able to increase our food production and achieve self-sufficiency in food. Canals are also becoming a source of tourist attraction these days.