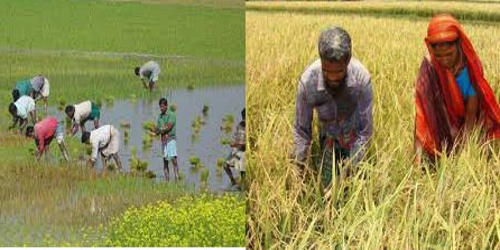 The Peasants of Bangladesh

The Peasants of Bangladesh

Capitalistic profit motive economy forced traditional agriculture to move toward the commercialization of agriculture in Bangladesh. Bangladesh is an agricultural country. Most of her people depend on agriculture and they live in the village. Peasants are illiterate, poor, and helpless. But they are very hard working. However, Bangladeshi traditional peasants are suffering from getting their crop duly prices in commercialized market relations. They work from dawn to dusk. Still, they cannot manage food two times a day and maintain their family well. The peasants who are engaged in cultivation are either landless or marginal farmers. The other alarming issues are declining crop-land and conversion of khas land for public purposes and commercial use. They have a very few acres of land or no land of their own. Peasants who do not have their own land, cultivate the land of other landlords or rich farmers on a contract basis to get a stipulated share of the total production. A significant part of the khas land is not within the custody of the government due to illegal occupation and encroachments.

These peasants are unable to fulfill their basic needs; hence they cannot cross the poverty line. Usually, a peasant gets up very early in the morning and works until it is noon. At noon he comes home, has some meal, and takes rest for a while. Then again, he returns to his field and works till it is dark. A peasant leads a very simple life. He lives in a hut or a thatched house. He is ill-fed, ill-clad, and ill-treated. He does not have any great ambition. He never thinks about power, fame, and modern amenities of life. He cannot send his children to school. He never hankers after money. He has no greed. He only thinks about his land, his bullocks and plow, and crops. He does not bother about the modern world. The peasant joint family structure is changing to single-family. Peasant festivals, customs, and cultures are decaying.

Peasants of our country are illiterate and superstitious. They never think about the modern and scientific methods of cultivation. Peasants who well off do not cultivate themselves. Their children stay in towns and cities to study there. Peasants’ social organizations, traditional cultures, cultivation technologies, and peasant economics (agro economics) are changing and moving toward mechanized capital intensive agriculture that creates inequality and injustice in the society among poor peasants by rich peasants in Bangladesh.

The peasants of Bangladesh always depend on the whims of nature. As a result, they have to suffer a lot. Land reform is a marginal issue in the policy agendas of the Bangladesh government. There is debate among academia and policymakers whether distributive land reform is feasible in Bangladesh or not. Natural calamities like flood, drought, cyclone damage their crops and houses. The Land grabbing culture has increased due to the non-transparent land administration system. Besides, they cannot get a reasonable price for their products for which they always face deficiency. Our govt should provide loans without interest, provide training facilities, transfer of technical know-how, supply fertilizers, insecticides, and good seeds at the minimum cost. Then the condition of our peasants will be improved.