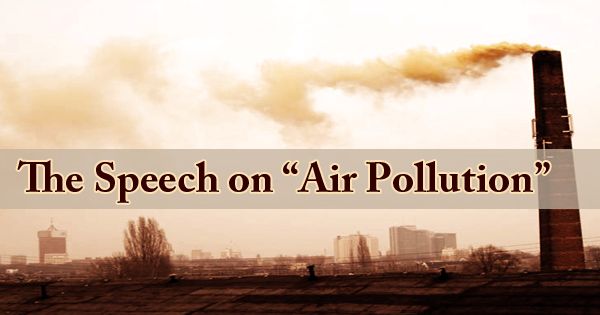 The Speech On Air Pollution

Thank you all for taking out time and being present at this seminar session. Today, I would like to speech on the topic of “Air Pollution”. We are here today to open your eyes, to show you that we need to change our actions radically to make a difference.

WHO (World Health Organization) describes air pollution as “the presence in the air of substances placed in concentrations sufficient to interfere with man’s comfort, safety, or health or with the full use or enjoyment of his property by acts of man. The presence of pollutants in the environment is known to be adequate in quantity and length to cause harm to human, animal, and plant health and to reduce overall welfare.”

As a result of air pollution, 7 million people die worldwide each year. It is already the case that, because of our current level of air pollution, a person’s lifespan is shortened by around 3 years. Therefore, to ensure that this number decreases rather than increases, we all have to work together. Since this should not go on like this, we have to be cautious not to extinguish civilization only because too many citizens are not prepared to give up that stuff and raise air pollution too constantly. And not only are we humans faced with the consequences, but all animal populations depend on good air quality as well.

Air pollution exists in amounts that are hazardous to human health and the atmosphere because of the presence of undesirable solid or gaseous particles in the air. Natural causes, such as volcanoes that emit ash, dust, sulfur, and other gases, or forest fires that are sometimes naturally caused by lightning, can pollute the air. However, unlike naturally occurring contaminants from human activities, pollutants tend to linger in the environment for a short period and do not contribute to permanent atmospheric change.

Industry’s coal-fired power plants, excessive vehicle traffic, aviation and shipping, chemical fertilization, and agricultural pesticides are causes that kill the clean air and, eventually, all the mammals to which we humans belong. Even in our own homes, we find items like food, heating, and lighting that are radically detrimental to the air. And most of these items are just luxury goods that could well be lived without by anyone.

Pollutants directly released from identifiable sources are generated by both natural phenomena (e.g., dust storms and volcanic eruptions) and human activities (emission from vehicles, industries, etc.). Main contaminants are called these. Together, there are five main contaminants that contribute to about 90% of global air pollution. There are carbon oxides (CO & CO2), oxides of nitrogen, oxides of sulphur, organic volatile compounds (mostly hydrocarbons), and particulate matter suspended.

Air pollution varies from waste pollution in many respects. Discharges from industrial premises in the atmosphere are often more or less constant during working hours and, depending on the wind and weather, they may drift high or low and in any direction. For those who have to breathe oxygen, air pollution is more common in its consequences than other forms of pollution. It not only produces cancroids for the animates, but also for the in-animates.

Air pollution causes fatal strokes, air pollution causes heart failure, air pollution causes respiratory disease, air pollution not only affects our health but also dramatically warms our environment, air pollution causes the planet to warm up, among other things, to the point that in the near future it will be uninhabitable. In China and India, for example, most people are now wearing face masks because they will experience health harm directly if they breathed the air in there. In addition, toxicity also impacts human health due to radioactive compounds that are ingested. For instance, higher-dose lead particles from vehicle exhaust can kill outright but can shorten life span by causing nervous system degradation in the lower dose.

The pollutants produced in the atmosphere are referred to as secondary pollutants when certain chemical reactions occur among the primary pollutants, such as sulfuric acid, nitric acid, carbonic acid, etc. It is possible to broadly divide air pollution sources into natural and anthropogenic ones. Volcanoes, forest fires, and pollen are natural causes. Everything involving human activities are included in the anthropogenic sources.

Both economic growth and insecurity are causing air pollution. The very high level of outdoor pollution in cities is responsible for increasing traffic and industrial growth. Economic growth, however, also provides people with access to safer cooking fuels such as cooking gas, thus reducing indoor air pollution and protecting women and babies from inhaling the contaminants emitted by bio-fuel combustion. We need to tackle indoor and outdoor pollution simultaneously.

We just need to stop being so greedy, to stop acting on our comfort. And if we just only want to be egoistic, then remember: it’s also selfish to protect the air and the atmosphere. If we protect the atmosphere and the air so that people don’t die. Acting selfishly and repeatedly, not leaving our comfort zone, which might help the world, is like shooting ourselves or others. You are eventually responsible for your own death, or for the deaths of generations to come.

In the world’s underdeveloped countries, air pollution is caused by industrial and agricultural production, the establishment of thermal power plants, and the development of the mining industry. Air pollution is also a major problem for both underdeveloped countries in towns and urban industrial areas. There is particulate matter that is toxic to humans, animals, and plants in the form of soil, dust, and solid waste is thrown into the air.

At the end of the day, I just say that, Respiratory infections, strokes, heart disease, and our planet’s death. Much of this is induced, among other things, by manufacturing, transport, and unnatural agriculture, and unnecessary waste of energy in our own homes, because these things pollute our environment in a fundamental way. We must understand that our future, our planet’s sustainability, and our fellow citizens and animals are in our hands.

And so, I ask all of you to change your mindset, because otherwise our world, which truly gives us everything, will become a dead planet because air pollution and the ensuing global warming have caused all mammals to become extinct. So if there is a problem, the solution is certainly there, too. It’s just that we need to define the problem, determine the existence, source, and origin of the problem, and then work on it accordingly.