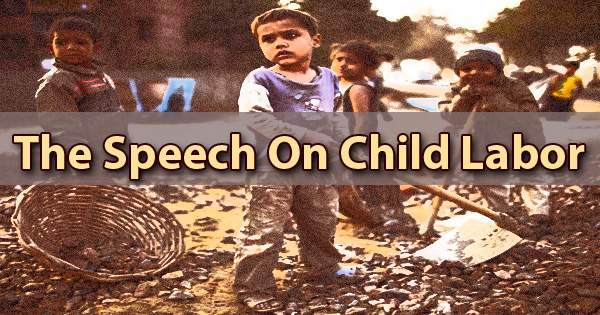 The Speech On Child Labor

I am here today to give a speech on the topic of “Child Labor.” Child labor refers to the trafficking of children for the performance of manual labor, which deprives them of their childhood and their basic rights to education and health. It ruins a child’s life, blocking all educational and advanced venues. Child labor has become the world’s most critical issue because it affects both psychologically and physically on children. It also destroys children’s future. Our kids hold the key to a brighter and healthier future as the planet grapples with a multitude of problems. At least that is what we believe in, but when we involve small children in profit-generating economic practices, our purpose seems to be clouded. Yeah, many lose their consciousness and their sense of empathy seems to be missing through seeking superficial monetary objectives by wrongdoing while placing the country’s future at risk.

Economic deprivation takes a toll on millions of families around the world and, in some places, it comes at the expense of the physical wellbeing of a child. Almost 1 in 10 children worldwide (around 152 million) are exposed to child labor, about half of whom are in unsafe types of jobs. For different purposes, children can be forced into work. Child labor most frequently happens when families experience financial problems or instability, whether due to hardship, a caregiver’s sudden illness, or a primary wage earner’s loss of jobs. Every child must be nurtured with care and love for family and community as a gift of God, but children would be forced to work in industries, leather factories, hotels, and a self-service restaurant due to social-economic problems.

In return for some income, a place to live, etc., child labor is an imposition of manual labor on children. Often the kids are used as bondage labs because they don’t ask for a lot to pay. Not only does it rob them of their childhood, but it also destroys their universal right to education, etc., and destroys their whole future. Child labor, and even death, can lead to serious bodily and mental damage. Slavery and sexual or economic abuse may contribute to it. And it cuts kids off from education and health care in almost every situation, limiting their human rights and threatening their futures.

Child labor is a disease which, to date, continues to affect our society. It is a threat that is deep-rooted and has contributed to a culture that is shackled. A culture where children are compelled to replace school with grievances and adolescence with premature adulthood with receiving, joyous life lessons. There are still many areas around the nation where children are used as slaves and held as slavery laboratories, even in today’s world where education is prioritized by both the government and parents. People keep kids as workers and slaves because they don’t demand much money and they’re easy to dominate. Although it is illegal to keep under-aged kids as employees in India, we can still find under-aged kids working.

Child labor is not a minor problem in the economic problems of society, so we should first concentrate on the socio-economic concerns of society in order to eradicate child labor. Poverty, debt, illiteracy, corruption, weak enforcement of structures and rules, failure to prepare for families, etc., are some of the reasons why child labor has become a permanent issue. The cure for these issues is not immediate. Reform must be achieved in a gradual and consistent manner. Having children work in factories and putting their lives in danger at an age when they could bask in the sun and lead a life free of worries is especially inhumane.

In order to supplement the family’s income, children are typically worked by their own parents. Children engaged in child labor are forced into a life of suffering and hardship and never get a chance to go to school. Not only does child labor destroy children’s lives, but it also hinders a nation’s economic and social development. A nation’s future depends on its youth, and if today’s childhood suffers, tomorrow the nation will suffer.

There are thousands of barefoot children who work day and night at horrendous mine temperatures surrounded by explosives and poisonous gases, as you whine about the small things in life. What have they been doing to deserve this? Isn’t it your responsibility to support them?

According to this, more than 50% of African children (aged 5-14 years) are employed. For years, the world’s agriculture industry has become the biggest employer of child labor. In rural settings and the informal urban economy, where children are forcibly employed by their owners or guardians, a significant percentage of child labor is found. The rate of child labor worldwide has decreased considerably, according to World Bank statistics (25 percent in 1960 however, reduced to 10 percent by 2003).

Child labor compounds social injustice and sexism, regardless of the reason, and robs girls and boys of their childhood. Child labor restricts access to education and hurts the physical, mental, and social development of a child, unlike activities that help children develop, such as contributing to light housework or taking on a job during school holidays. The “triple burden” of education, work, and household chores increases their risk of falling behind, especially for girls, making them even more vulnerable to poverty and exclusion.

We should be aware of this problem in-depth, my dear friends, and take some constructive measures to eliminate this issue from society. We are highly responsible for the country’s growth and development as young people, so we can work positively in the areas that conflict with it to move forward. Through saying that the solution is only in the possession of the government, I want to conclude. The requisite steps need to be taken to get rid of poverty by providing the parents of child laborers with jobs. Educating kids is important. To educate poor children, the government should allocate the requisite funds. Many legislation and oppressive child labor department’s exist. As the country’s youth, we should recognize our obligation to the nation and take some constructive measures to eradicate this social issue.