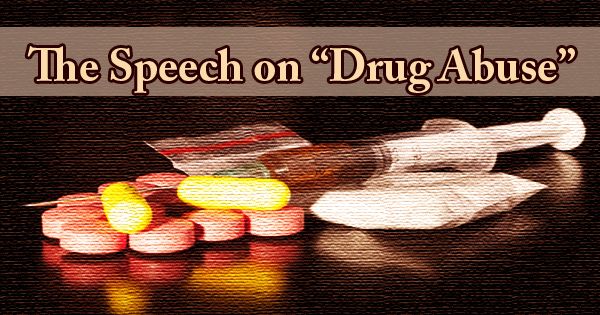 The Speech On Drug Abuse

A very Good Morning/Afternoon/Evening to Honorable Principal Sir/Madam, respected teachers, seniors, and my dear students, Warm Greetings to Everyone!

Thank you all for taking out time and being present at this seminar session. Today, I would like to speech on the topic of “Drug Abuse”. I would like to give a brief speech on substance addiction before the discussion starts and would like to educate our students and youth generation on this sensitive subject matter.

The word ‘drug’ when it comes to one’s mind is taken in a negative sense as it is often misused. It will make a big difference in people’s lives if the medications are used for a useful reason. As we all know, drugs are an illicit matter that certain individuals drink, smoke, inject, or consume for the emotional and physical consequences it leaves. The drug itself is not a toxic material. Yet in many ways individuals abuse it. It is extremely dangerous and if one takes it on a daily basis, it can cause severe health issues.

There are over 190 million drug users worldwide, and the problem has risen at alarming rates, especially among young adults under 30 years of age. There are some students who for fun or for various other purposes, take drugs. In order to get them addicted to drugs, people who trade in the sales of drugs build a network and primarily target students. In addition to the long-term harm caused by the misuse of drugs by the body, drug users who use needles are often at risk of HIV and hepatitis B and C infections. Initially, the drugs are sold for free to the students and when they become addicted to it, they begin to buy and consume it gradually. In truth, students eventually become part of their network as well and begin to deal with it.

Caffeine, tobacco, nicotine, and many more are the medicines used in a large range in the world. It is considered that these medications are recreational drugs. The medications used for fun and not for medicinal reasons are referred to as recreational drugs. For drugs of abuse, there are several different routes of administration, including orally in the form of a tablet, intravenously in the form of an injection, by inhaling the substance from the smoke, or by snorting it so that it is absorbed into the nasal vessels. It could turn out that the misuse of such psychoactive drugs is very dangerous for the entire human race. Psychological or physical addiction may be induced. Many of these medications have tremendous side effects; many diseases will later arise from these side effects.

Drug abuse has become one of the serious social issues in both developing and industrialized nations, and it is undeniably the greatest barrier to the overall growth of individuals, cultures, countries, and the world as a whole. Men are, however, more likely than women to abuse drugs; single people are more likely than married people, and urban dwellers are more likely than rural dwellers. Often, prisoners, street children, and younger people are more likely to misuse drugs. Parents, guardians, teachers, and the general public were all profoundly concerned about the detrimental impact of alcoholism and substance addiction on family, social, and personal lives. There are not unusual accounts of serious injuries and murders committed during intoxicating states.

Many teens these days claim that what makes them look cool and make a style statement in front of others is the practice of drinking, smoking, and even drug abuse. However, it is only when these individuals are stuck in their vicious cycle that they know that they have caused their lives to be irreparable. Drug abuse implies a drug’s excessive use irrespective of whether a person is actually dependent on it. However, substance addiction will subsequently lead to drug dependency. Therefore the government has come up with stringent laws and regulations on the manufacturing of these products. This industry is closely regulated, so it is possible to reduce the smuggling of drugs as much as possible.

Therefore, I ask all students and young people to fully refrain from drug use until it ruins their wellbeing, their future, and takes their lives away. Don’t even try to get close to them or touch them. As responsible citizens of our country, it is our responsibility not to abuse the drugs as it will cost us our lives and adequately obey the government’s rules and regulations. Drugs can also kill an entire generation.

Therefore, I request everyone to strictly say ‘No to drugs and get these individuals admitted to recovery facilities where their situations can be improved before it becomes awful and prove fatal to that person.