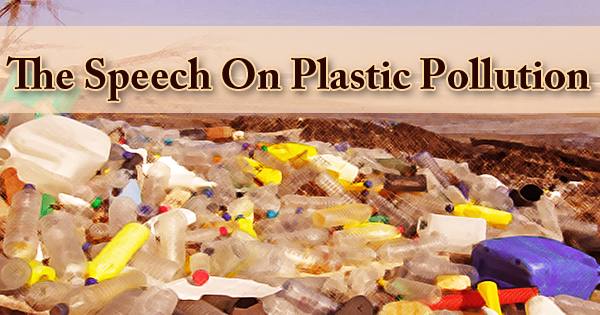 The Speech On Plastic Pollution

Thank you all for taking out time and being present at this seminar session. Today, I ……(name) stand in front of you all to address a very important topic which is making a lot of news these days; I would like to speech on the topic of “Plastic Pollution”.

Plastic is a synthetic substance first synthesized by Leo H. Baekeland in New York in the year 1907. To make it, he used cheap chemicals. It was then commonly accepted, and plastic began to be produced on a large scale. Nowadays, plastic is everywhere. It is endlessly used by people only for their comfort. No one, however, knows how it is destroying our world. So that we can stop plastic waste, we need to become aware of the implications. To stop using plastic, kids should be taught from their childhood. Similarly, adults should look at each other on the same basis.

We all know that plastic does a polymeric substance, a material with very large molecules, often resemble long chains made up of a seemingly infinite series of intertwined bonds. In abundance, natural polymers such as rubber and silk exist, but the “plastics” of nature have not been involved in environmental degradation because they do not survive in the atmosphere. The plastic allowed a major entrance into the sectors. Because of the reduction in manufacturing costs, the price of anything made of plastic began to fall. A huge amount of profit was generated from all the organizations. It was not until recently that the amount of damage plastic does to us and to the whole world was calculated by people.

In addition, we see that non-biodegradable material is plastic. It does not leave the Earth’s face. Plastic can’t be dissolved in land or water, it stays forever. Therefore, more and more use of plastic indicates more plastic that will not be dissolved. The increase in plastic pollution is therefore occurring at a very rapid rate. To put it plainly, when it is strewn everywhere on the highways, lanes, poured into the rivers, etc, plastic contamination is caused. It then adversely impacts our living ecosystem and does great damage to our ecosystems, plants, and even human populations. Undoubtedly, plastic is such a useful commodity, but we should not overlook that it consists of such poisonous substances that are not biodegradable in nature and propagate disease in our climate, causing irreversible damage to living beings.

However, today, the average user comes into regular contact with all sorts of plastic products that have been deliberately designed to defeat materials derived predominantly from petroleum that can be molded, cast, spun, or applied as a coating in natural decay processes. In natural settings, because synthetic plastics are mostly non-biodegradable, they appear to persist. Thermoplastics (polyvinyl chloride and polystyrene) and thermosetting polymers are primarily known as plastic materials (polyisoprene). They can also be divided into engineering, biodegradable and elastomeric plastics in addition to these.

Biologically, a plastic bottle can take up to 1000 years to degrade. Each year, more than 300 million tonnes of plastic are expected to be produced. The planet has seen a spike in industrial waste, and so much plastic. With plastic waste, the landfills are saturated. Therefore, researchers had to come up with an idea about how to recycle them. Plastic releases poisonous gases such as CO and NO when burned. If these gases are inhaled over a long period of time, severe diseases such as dementia and mental illness can be induced. Compared to the amount of plastic that is manufactured every day, the quantity of plastic is small.

The entire world, including humans, animals, and sea life, is now threatened by plastic contamination. Like a disease that has no cure, it is spreading. In order to eliminate it as soon as possible, we all have to understand the adverse effect it has on our lives. In addition, many lightweight single-use plastic items and packaging materials, which account for nearly 50% of all processed plastics, are not stored in containers for eventual disposal at landfills, recycling centers, or incinerators. No more plastic-free biodiversity on the earth. Also, the most inaccessible areas are overflowing with plastic waste, including the Arctic Circle and the Himalayas.

Although plastics are very useful in so many ways and are an integral part of the large-scale polymer industry, all living forms on our planet Earth are massively threatened by their manufacture and disposal. More than 255 million tons of plastic are floating on the surface of the oceans and are currently falling into the ocean bed. Animals such as birds, fish, and cows do not know the difference between food and plastic. They feed and do not digest plastic. The amount of plastic that is undigested is growing, leading to eventual death. Since they eat plastic, the coral reefs are increasingly dying. When plastic waste is thrown into the rivers and seas, it flies with the changing of tides to distant areas in the world. Hence, no part of the planet is plastic-free.

Plastic is constantly used because it is easy to reach and cheap and can last for a long period of time. Unfortunately, these very plastic characteristics make us highly reliant on them and create a major problem with pollution. It is more and more used and often discarded because the plastic is cheap, the persistence of which causes great harm to our environment. The increase in concentrated plastic waste in major cities has also been caused by urbanization. Plastic releases such chemicals when in contact with heat, which are highly harmful to our body when ingested. It is also recommended that plastic water bottles should not be used. The amount of harm done to our world by plastic is immeasurable because plastic has reached areas where it is unlikely for humans.

In short, we see how everybody’s life on earth is destroyed by plastic pollution. To avoid it, we must take major steps. Instead of plastic bags, we could use choices like cloth bags and paper bags. If we buy plastic, it has to be reused. Drinking bottled water, which primarily leads to plastic waste, must be avoided. The state must impose a plastic ban on the use of plastic. To a significant degree, all of this will eliminate plastic waste.

So let’s come together and make a promise at all costs to protect our natural environment, because if we don’t, nobody else will, and our next generation will have to bear the brunt. The earlier the better and the plastic should be used in case of shunning; there should be no more ado.