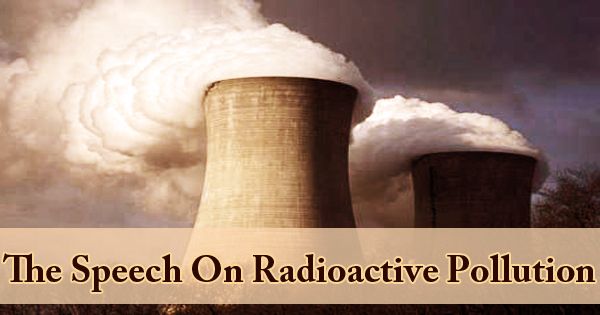 The Speech On Radioactive Pollution

Thank you all for taking out time and being present at this seminar session. Today, I ……(name) stand in front of you all to address a very important topic; I would like to speech on the topic of “Radioactive Pollution”.

The by-products of nuclear power generation and other uses of nuclear technology are commonly radioactive waste. Radioactive contamination, also known as radiological contamination, is the presence of solids, liquids, or gases in radiological substances. This form of contamination is harmful because, like leukaemia, it is capable of having long-term hazardous effects on humanity. When the nuclei of atoms begin to disintegrate, a material becomes radioactive. The atom becomes unstable as this takes place and begins emitting radioactive particles. We can also feel a burning effect if we come into contact with radiation: chemical burns are not the same as burns experienced from intense heat because chemicals are not needed to be at a high temperature for an organism to experience a burning sensation when we come into contact with them. However, burns from radioactive agents can cause damage to the tissues of our skin, discomfort, blistering, and reddening of the skin.

In rocks, soil, and water, many radioactive elements, such as radium 224, uranium 235, uranium 238, thorium 232, radon 222, potassium 40, and carbon 14, are present. Radioactive materials are converted into gases and fine particles that are transported by wind to distant locations. The radioactive particles fall on the ground as rain occurs, called nuclear fallout. Radioactive substances are taken from the soil by plants, so they enter humans and animals through food chains.

Radiation consists of a number of particles, such as alpha particles, gamma particles, beta particles, and a type of electron called ‘electrons of conversion.’ Radiation is not always possible to track when it touches a person’s skin. But we all know it is dangerous. For that matter, when it is alpha radiation, a human or a living being must be within the scope of the source of radiation to be affected by it; whereas other sources of radiation can easily cover long distances and have a harmful impact for miles around on humans, animals, and plants.

Man-made substances, on the other hand, include the manufacturing and mining of uranium, thorium, nuclear weapons production, fuel preparation, and nuclear power plants. The breaches occurring at nuclear power plants, which also contribute to the release of radioactive matter into our atmosphere, are one of the key causes of radioactive contamination. If nuclear energy becomes a major replacement for fossil fuels, this risk continues to increase. Radioactive pollution has no easy cure; people have to be vigilant and use it wisely. Any of the steps below should be taken into account:

There should be specific warnings about the existence of radioactive contaminants because if a human or other living being comes into contact with radioactive materials, all living beings will also be infected anywhere that person goes. We should strictly avoid ushering in those areas that are vulnerable to radiation, friends because minor negligence will cost us immense irreparable harm and the cost of which will be paid by our generations to come.

A lot can still be said on the subject, but I will rest my speech here by summarizing on a grateful note saying that you have all made a great contribution to this cause, but a lot still needs to be done, and I would ask everyone here to be careful and remain vigilant of those nuclear power sites that can inadvertently cause great harm to the lives of many.