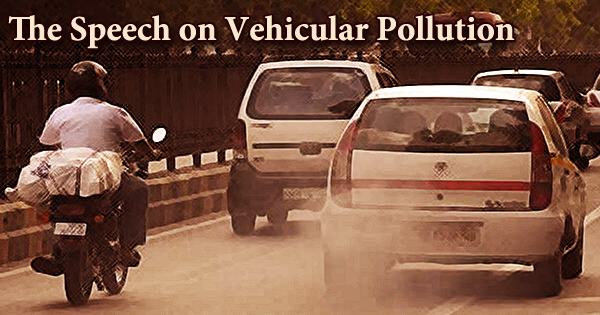 The Speech on Vehicular Pollution

A very Good Morning/Afternoon/Evening (Ladies and Gentlemen) to Honorable Principal Sir/Madam, respected teachers, parents, seniors, and my dear friends/students, Warm Greetings to Everyone!

Thank you all for taking out time and being present at this seminar session. Today, I ……(name) stand in front of you all to address a very important topic which is making a lot of news these days; I would like to speech on the topic of “Vehicular Pollution.”

The introduction of hazardous elements into the environment by motor vehicles is known as vehicle pollution. These substances are known as pollutants, and they have a variety of negative consequences for the environment and human health. A vehicle has always been a primary necessity for the general public in our country, whether it is a scooter, motorcycle, or automobile; there was a time when having one’s own mode of transportation was considered a status symbol, but nowadays it is a necessity for everyone, whether in urban or rural areas, to commute from one location to another.

We all know that due to the large number of cars on the road nowadays, transportation is a major source of air pollution in numerous nations across the world. Vehicle-related air pollution in metropolitan areas, particularly in large cities, has become a serious issue In today’s world, life would be inconceivable without automobiles, and while automobile pollution cannot be eradicated, it may be regulated or lowered to acceptable levels. The number of motor vehicles in most major centers is high, resulting in traffic congestion. When a large number of cars congregate in one location, emissions per kilometer increase, adding to vehicular pollution.

Vehicle pollution has become a major issue in metropolitan areas, particularly in large cities. Coughing, headaches, nausea, eye discomfort, and numerous bronchial and visibility issues have all been linked to car pollution. In urban and crowded regions, carbon dioxide and volatile organic compounds (VOCs), which include halocarbons, hydrocarbons, and oxygenates, are found to be 250 percent higher than in areas with moving traffic, resulting in secondary pollutants.

There has been tremendous growth in the number of cars created during the previous several decades. The increasing increase of cars necessitates the use of additional fuel, resulting in the release of hazardous gases into the atmosphere, resulting in air pollution. 2-stroke engines, low fuel quality, outdated cars, inadequate maintenance, heavy traffic, bad road conditions, and antiquated automotive technology and traffic control systems are some of the additional sources of vehicular pollution in metropolitan settings. The environmental effect of automobiles ranges from 80 to 90%. According to research, on-road cars are responsible for one-third of all air pollution and 27% of all greenhouse gas emissions.

Chemical substances released from automobiles, trucks, petrol stations, and other sources contribute to harmful air pollution. Sulphur dioxide, a significant pollutant emitted into the environment when sulphur is present in fuels, particularly diesel, is another important contaminant. There are a number of problems with gasoline engines that might lead to pollution. Evaporative emissions, for example, arise when fuel evaporates from fuel tanks or carburetors and mixes with the environment. The immediate effect is on humans, posing a health risk, while the long-term effect is on the ecosystem, causing global warming, acid rain, and ecological imbalance, among other things.

Vehicle production has increased dramatically during the previous few decades. In 2020, the global vehicle population is expected to reach 1.1 billion, with Europe and the United States accounting for around two-thirds of the total. Another major cause of vehicle pollution is carbon monoxide, which is produced when gasoline is burned. It’s a colorless and odorless gas. When carbon monoxide is breathed, it prevents oxygen from reaching the heart, brain, and other bodily organs.

Many major international governments are concerned about global warming, and intentional measures have been made to decrease it. When the ozone layer is depleted, the sun’s damaging UV radiation can reach the earth’s lower surface, harming people and other living creatures. Diesel vehicles are more likely to pollute the air and cause ailments such as cough, headache, nausea, asthma, and other respiratory issues, among other things. Lead was once used in fuel to improve the efficiency of combustion, but it was phased out since it released toxic chemicals such as lead and benzene into the environment, which was more dangerous if inhaled by anybody.

Vehicles, on the other hand, generate additional pollutants that contaminate the air and have especially negative consequences for individuals and the environment. Visibility becomes a major issue in severely polluted cities with a large number of cars emitting such smoke. When there is fog, the situation deteriorates, resulting in the creation of smog (a mixture of smoke and fog). People in numerous nations use masks to regulate the hazardous air they breathe since the air quality is so poor. This is generally an issue in countries with a large number of vintage automobiles. As a result, some countries have enacted legislation prohibiting the entry of cars that are more than a certain number of years old.

Ladies and gentlemen; every year, around 5,000 individuals die as a result of lung cancer and heart attacks brought on by automobile exhaust emissions. Treating these diseases costs a lot of money and creates a lot of mental distress for the patient’s family. Most individuals would not deliberately travel to places where they are aware of health risks. As a result, the number of visitors visiting such nations will decline, resulting in a loss of foreign exchange revenue.

Taking care of a vehicle’s tyres and fuel tank reduces exhaust emissions. Carpooling, taking public transportation, improving and maintaining roads, and driving CNG-powered cars instead of gasoline or diesel vehicles all assist to reduce air pollution. Regular car pollution inspections from authorized centers are essential, and now is the time to remove outdated vehicles from cities and replace them with electric vehicles for mobility. We are utterly reliant on fossil fuels, and the number of automobiles on the road will continue to rise.

We can only try to minimize automotive emissions by doing our part, and one of the easiest ways to do so is to drive less and instead walk, use the train or public transportation, or ride a bike. Carpooling is another approach to reduce driving by allowing individuals from the same neighborhood or area to share a car rather than everyone having their own. Vehicles are always held accountable for the generation of greenhouse gases, accounting for 70% of CO2, 50% of HC, 30%-40% of NOx, 30% of SPM, and 10% of SO2 in total air pollution over cities.

Most city governments may take steps to reduce vehicular pollution, given that automobiles emit more emissions in urban areas due to traffic and the fact that people must drive slowly in cities. The need to go to work every day exacerbates the problem of automobile pollution. Although vehicle pollution cannot be completely eliminated, each government must adopt appropriate measures to regulate or decrease pollution to acceptable levels. It is also the obligation of each individual to take the necessary steps to help limit air pollution.

Problems always have a solution; all we have to do is look for it and put it into practice. Many individuals are aware of the consequences of these emissions but choose to remain ignorant, while others are completely unaware of them. Civic education, particularly on the short- and long-term impacts of vehicle pollution on our lives and the environment in general, has the potential to open people’s eyes and assist them in making rational decisions. The vehicle’s operation characteristics can be changed or designed in such a manner that the high temperature of the combustion system, which generates the hazardous gas, is reduced. Some high-tech gadgets might be utilized to minimize nitrogen oxide production and emission in combustion chambers.

Also, many thanks to you and everyone else who is here. This is all I have to say today.