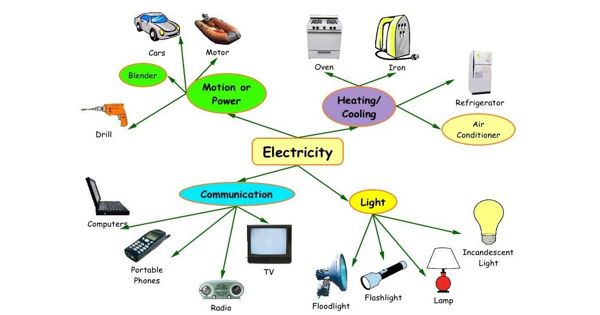 The Use of Electricity in Daily Life

When Benjamin Franklin proved the connection of lightning with electricity, he paved the way for researchers that have led to the harnessing of the greatest power in nature so far known to the services of mankind and thus conferring on the human race incalculable benefits. For we cannot imagine the modern world without electricity. In almost every town worth the name, the residence of almost every citizen is at least lighted by electricity; and in many of them, in a tropical country, it is used to drive the fans on the hot days. Some use electric cooking ranges in their kitchen; this is ever so convenient since it does not produce ashes or soot, and its heat can be regulated according to necessity. Electric bells are now usual in offices, in educational institutions, and in many private homes. Rich people air-condition their rooms with the help of electric power. Refrigerators for the storage of food are becoming more and more common; they help in saving food that would otherwise have been thrown away. The telephone, as yet a rarity in Indian homes, is indispensable in Europe and America. The radio is fast finding its way into our homes in the remotest parts of the country. Machines for laundering and for cleaning up are common in European houses, and will soon be in ours, as servants become rare, and housewives have to be busy outside homes.

Outside home, we are coming to depend more and more on electricity. We go to our schools or office in electric trams. We send messages of urgency far and near over the electric wire. Electricity is needed to broadcast radio messages. In America and Europe, as well as in our country, television is used to see and enjoy interesting sights in distant places: sitting in one’s home one can witness something of a football match or a public ceremonial. Television and radio add a cheerful note to family life.

This is a marvel of the universe;

To fling a thought across a stretch of sky, –

Some weighty message, or a yearning cry,

It matters not: the elements rehearse

Electricity is a blessing to the physician who has to take its aid in the diagnosis and treatment of diseases. The engineer has reason to bless it for, simplifying his work. In the laboratory of the scientist, it is a constant assistant. In the office its utility is universally admitted; without various types of electrical appliances, a modern office would come to a standstill. From the rotary fan to the circulating escalator from the Dictaphone to the accounting machine,—there is a variety of mechanical contrivances run by electric power that operates gigantic machines and does the work of hundreds of men. The farmer has learned to use it as an aid in the cultivation of the field. Thus from the home to the field and factory, it is everywhere a tireless servant of man.

The superiority of electricity over other forms of power is patent. As a means of warming or lighting our rooms it does not pollute the atmosphere, for it neither consumes oxygen nor gives out carbonic gas. Its power of illumination is, also very much greater than all other artificial means of lighting. In our kitchens, the use of electric stoves eliminates smoke and soot. However inconvenient, otherwise-e the electric tram is superior to petrol-driven engines of motor vehicles in that it does not poison the atmosphere by emitting foul smoke. The growing scarcity of domestic assistants makes the use of electrical gadgets a boon and a blessing. It improves sanitation is, ensures cleanliness. Electricity is not, however, without its element of risk. It is a deadly and uncertain servant. A shock produced by contact with a live wire that is carelessly left uninsulated or unprotected may cause instant death. A slight dislocation anywhere might lead to a sudden stoppage of supply and might hold up without warning very important work. It is often affected by atmospheric conditions and this causes trouble and irritation. Of course, modern researchers have greatly minimized the dangers, and we do not worry about them today. Knowledge of science has taught us that, if electricity is a hard-working servant, it is a service that needs constant vigilance. Great though the advance has been in the use of electricity in our ‘daily life, we have not reached the end of the possibilities of using electric energy. A time will come when electricity will be man’s only servant at home and abroad, the sole power that orders and regulates his life. Its benefits indeed are too great to be described in brief.