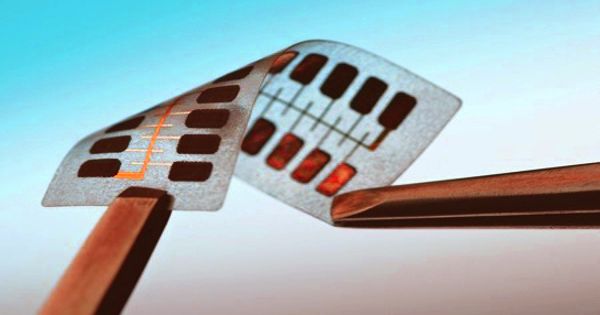 Thin films are layers of material deposited on a bulk substrate in order to impart properties that cannot be easily attained by the base material. Thin-film memory is a high-speed alternative to core memory developed by Sperry Rand in a government-funded research project. In the early 1960s, these memory arrays offered significantly faster performance than mainstream magnetic core technology. Thin-film memory is produced by depositing very thin spots of metallic (Ni-Fe) alloy on a ceramic or metal plate. This spot performs in the same manner as the core, except that only two wires are required.

A typical thin film element consists of a rectangle about 0.625 mm by 1.25 mm with a thickness of about 0.00001 mm. Instead of threading individual ferrite cores on wires, thin-film memory consisted of 4 micrometre thick dots of permalloy, an iron-nickel alloy, deposited on small glass plates by vacuum evaporation techniques and a mask. Vacuum-deposited dots of ferromagnetic alloy material on glass substrates were overlaid with a multilayer grid of connecting wires that served as drive and sense lines similar to those of a magnetic core array.

The drive and sense lines were then added using printed circuit wiring over the alloy dots. This provided very fast access times in the range of 670 nanoseconds but was very expensive to produce. Computer researchers around the world are working to create better data storage devices, with the gold standard being a ‘universal’ memory device with the quickness of RAM, the storage space of a hard drive, and the stability of a flash drive. Non-volatile memory based on ferroelectric thin films is one promising development that is currently in the research stage.

Sperry Rand developed the technology under a National Security Agency contract and announced its commercial availability in the Univac 1107 Thin-Film Memory Computer in 1962. In 1962, the UNIVAC 1107, intended for the civilian marketplace, used thin-film memory only for its 128-word general register stack. In this application a 128-word thin-film general register stack achieved a cycle time of 600 nanoseconds compared to 4 microseconds of the 16,384 36-bit word main memory. Military computers, where cost was less of a concern, used larger amounts of thin-film memory. The Univac design and others by RCA and Hughes also served in airborne computer applications.

Thin film was also used in a number of high-speed computer projects, including the high-end of the IBM System/360 line, but general advances in core tended to keep pace. This rectangle can be thought of as a bar magnet. Applying a current which causes the polarity to rotate but not to flip, induces a current which indicates whether a 1 (one) or 0 (zero) was stored.