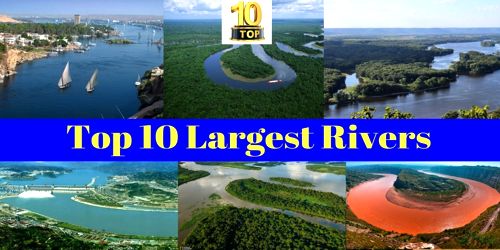 Top 10 Longest Rivers of the World

Rivers have been influential in determining the world’s history. Most earliest civilizations have sprung up and flourished along the largest rivers on earth. Apart from this, these rivers have seen empires ascend and drop, and many battles won and lost. Thousands of gallons of water piercing through the land and rushing towards the sea make up one of Nature’s most amazing creations. Below are listed the largest rivers of the world, by: This is the world’s longest river. It spans a mammoth journey of 4,132 miles before the mouth meets the Mediterranean Sea in the form of a vast delta in Egypt. Its water resources are shared by eleven countries, namely, Tanzania, Uganda, Rwanda, Burundi, Democratic Republic of the Congo, Kenya, Ethiopia, Eritrea, South Sudan, Sudan and Egypt. From Sudan, the river flows through Sahara desert and discharges into Mediterranean Sea. This river is the lifeblood of most Egyptians and majority of them live on or near the river. The Nile drains about 10 % of the entire Africa. Nile has only two tributaries; White Nile that originates in Rwanda and Blue Nile from Ethiopia. Both tributaries meet at Sudan. Amazon boasts being the 2nd longest river on earth at 3,976 miles. It is the second longest river in the world and is by far the largest by waterflow with an average discharge greater than the next seven largest rivers combined. Because of its enormous size, it can count at least 1/5 of the world’s complete flow. The Amazon flows in the following countries: Brazil, Peru, Bolivia, Colombia, Ecuador, Venezuela, and Guyana. This river is so powerful and so big that there aren’t any points along the river that can be crossed by a bridge. Amazon has a very powerful discharge at the mouth which can release as much as 8 trillion gallons of water every day. This river is about 150 deep! The longest river in Asia. The river flows for 3,915 miles from Tibet Plateau in eastward across the southwest, central and eastern China before emptying into East China at Shanghai. It is also one amongst the biggest rivers by discharge volume in the world. This river drains 1/5 of the land of the China, and its river basin is home to 1/3 of China’s population.

This is the chief of the largest drainage system in North America. The river has numerous tributaries and ranks as the 4th longest and 10th largest river in the world. The Mississippi flows mainly in the United States (98.5%) and the rest in Canada (1.5%). It flows towards the Gulf of Mexico. The river flows in the US; it rises in the northern Minnesota and Meanders slowly southwards for 2,340 miles to Mississippi River Delta at the Gulf of Mexico. This river passes and borders through Minnesota, Lowa, Wisconsin, Illinois, Missouri, Tennessee, Mississippi and Arkansas. The Yellow River is the 3rd longest river in Asia and world’s 6th longest river at the estimated length of 3,395 miles. The river originates in the Bayan Har Mountain in Western China. Also known as Huang He. The river flows through 9 provinces nine provinces, and empties into Bohai Sea near the city of Dongying in Shandong province. The river basin has an east-west extent of about 1,180 miles and north-south extent of about 680 miles. Its total basin area is approximately 742,442 square kilometers.

This is a major river in western Siberia, Russia, and the World’s 7th longest river. This river is 3,395 miles long, with a drainage area of 2,990,000 square kilometers and an average discharge of 12,475 cubic meters’ per-second. It flows in the following countries: Russia, Kazakhstan, China, Mongolia. The Ob forms 16 miles southwest of Biysk in Altai Krai at the confluence of the Katun and Biya rivers.

This is found in south Central South America with a length of 3,030 miles. Flows in Brazil, Argentina, Paraguay, Bolivia and Uruguay. It’s the second in length only to Amazon River among South American rivers. It’s also one of the biggest rivers on earth with a drainage area of 2,582,672 Square kilometers and an average discharge of 17,290 cubic meters per-second.

with measured depths in excess of 220 m (720 ft). It has a length of 2,920 miles making it the 9th longest river on earth. The Congo’s drainage basin is about 4,014,500 square kilometers. It is the third largest river in the world by volume of water discharged. This river together with its tributaries flow via Congo rainforest, the 2nd biggest rainforest in the world after Amazon Rainforest.

The Amur River is the world’s 10th longest river. This river is 2,763 miles long. The river forms the border between the Russian Far East and Northeastern China. Amur rises in the hills of Western Manchuria at the confluence of its two major affluents, Shilka River and Eugene River, at an elevation of 994 ft. It flows east forming a border between Russia and China, and slowly makes a great arc to the southeast for about 250 miles, receiving several tributaries and passing many small towns.