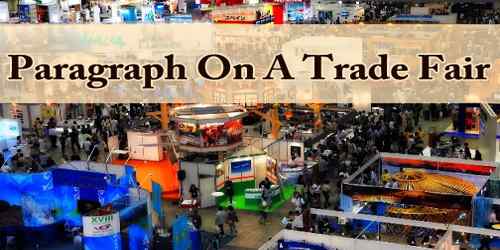 A trade fair is an attractive fair where different types of industrial goods are displayed. It is a one kind of publicity of drawing the attention of the national and international industrialists and producers. Nowadays trade fair is traditional. Many countries of the world arrange to show their produced goods to the international market. The people of others country can know about the industrial goods of the country. It can attract the foreign buyers. It helps to earn foreign exchange. It is a large affair. It is normally held once a year. The host country invites friendly countries to install stalls in the trade fair to display their exportable goods to the people of the host country. Works for arts, crafts, handicrafts, agriculture, industry etc. are placed in a trade fair. A trade fair plays a very important role in the field of making our homemade exportable goods to know to other countries. It displays the industrial goods to foreign buyers too. It also helps in earning foreign exchange. A country can be able to know about the other countries through trade fair. It encourages foreign countries to import goods from our country. It encourages foreign countries to import goods from our country. Therefore, it is necessary to hold a trade fair every year in our country. Trade fair plays a very important role in introducing our homemade goods to other countries. We can display our goods to foreign buyers. It encourages foreign countries to import goods from our country. Thus it also helps us in earning foreign exchange. We can also know about the new foreign products from the trade fair.

However, this year, I went to visit Dhaka International Trade Fair. Different types of goods were sold there. A large number of people gathered here. I enjoyed the fair very much. The foreigners can know also the culture of the people of a host country. So a trade fair should be held every year to encourage importers of foreign countries to import goods from our country.