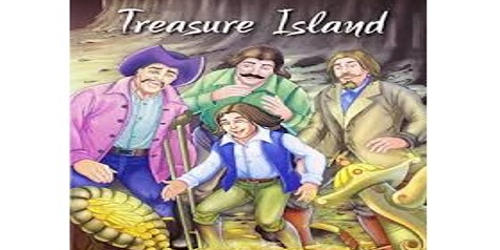 Choosing a favorite book is a real dilemma. I have read many books. Of all books, I like “Treasure Island” most the name of the author of this book is R.L. Stevenson. He is a very famous English writer. Once I start reading it I cannot leave it until I have finished it.

My favorite book is “Treasure Island”. The story is very interesting and thrilling. It is full of adventurous deeds.

Treasure Island by Robert Louis Stevenson was completely different to the other dull and worthy texts at school. An old sea captain and pirate named Billy Bones comes to stay at Admiral Benbow, an inn where a young boy called Jim Hawkins is living. The hero of the story is a boy of thirteen years old. His name is Jim Hawkins. Jim accidentally happened to be on a treasure-hunting expedition. Stevenson’s ability to both paint vivid pictures and keep the action flowing drew me not just into the world of pirates and buried treasure, but into the joy of reading itself. The treasure was hidden in a far-off lonely island by some pirates. Jim and his party and also the pirates were looking for it. They wanted to take it. It is a long story of great struggles, adventures, and heroic deeds. As a story of a right of passage for Jim, the book has a strong moral sense at its heart. Jim shows himself to be heroic in action, but modest in character.

The author with his powerful pen keeps me anxious and suspense from the beginning to the end. Written in the early eighteen-eighties, Treasure Island has a wonderful array of characters, good, bad, and ambiguous, including Black Dog, Blind Pew, and of course Long John Silver himself. The book is full of adventures, brave deeds, and the horrors and terrors of the struggle. Each location feels real, from the West Country cliffs and coves; to the bustling port, to life on the Hispaniola and then on the island itself. At last, I have a sigh of relief when I find that my here wins over will force of evils. This is only the book which is a great favor to me.

As a storybook “Treasure Island” is interesting to me. For me Treasure Island was the original boy’s own story and whilst occasionally I wince at the ripe language, it remains a thoroughly enjoyable read. It will be interesting to all young students of my age, I suppose.