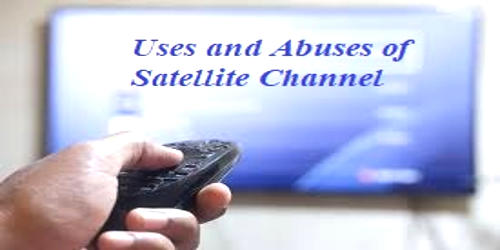 Uses and Abuses of Satellite Channels

Uses and Abuses of Satellite Channels

Telecasting the Television (TV) programs of the different countries of the world, satellite channels have added a new dimension to television. Satellite television has added a new dimension to TV programming and telecasting. Satellite telecasting gives us the opportunity of knowing the culture, politics, trade and commerce, present happening, and past incidents of the world. In fact, satellite telecasting appears the whole world lives in the box and entertaining us of all that is happening around the world. But at the same time, satellite channels telecast, vulgar and violent programs that have a negative impact on the soft mind of the young generation. Thus satellite channels have both positive and negative sides. It has made the segregated world united and interrelated. The whole world communities come closer and smaller through the Satellite Channels.

Uses: Satellite channels broadcast programs related to the culture of different countries. Now, in the present world, with the advancement of communication and technology, people’s tastes and interests have changed a lot. Television wonderfully and very effectively is satisfying people’s interests and demands for entertainment and information. We can enrich our culture by combining our own culture with the positive traits of another culture. Again the political condition of other countries, their initiative to develop the country, their move towards the improvement of the condition of the people, and political approach come to us through satellite channels. Television plays an important role in the business world. Television show advertisement for different products and thus give them a wide recognition.

Abuses: Television has a great influence on the young generation. In fact, many young people are addicted to watching television. It kills their valuable time that ultimately affects their study. Obscene and immoral films, drama or music, and videos can influence the young generation to evil-doing. Indeed, satellite TV is now being seen as a means of cultural assault on developing countries by western nations. Spending a lot of time watching TV also affects productivity and work efficiency. Much watching of color TV is also harmful to eyesight and brain, and cause irritation, idleness, and sleepiness.

Various programs such as scientific programs, debates, and informative programs broaden the domain of our knowledge. In providing entertainment the role of dish antenna knows no bound. After the day’s routine work, various programs like musical shows, dramas, comics, and other programs help us to get rid of fret and fatigue of the monotonous life. Despite these positive aspects, satellite channels have also some negative aspects. Firstly, it kills our valuable time. Many children pass more time watching TV than in reading. Not only the children but the adults also sometimes cannot avoid the charm of the satellite programs disregarding the wasting of time.

Sometimes, satellite channels also telecast vulgar and violent programs. The incident, dress of the actors and actresses, their immoral activities mislead the young generation. Again, violent movies may take them to the path of violence. Vulgar and nude programs on satellite TV attract the young people of our country. They demoralize the young generation, the vital force of a nation.

As a source of news and information and as a means of entertainment and recreation, television is still very popular and its effect is far-reaching. Nothing can be out and out good. Satellite channels are not an exception. It should be used for pure and harmless recreation and for constructing an ideal society. However, should not watch the bad programs of satellite channels and should watch only those programs which are supported by morality and are helpful for enriching our knowledge.