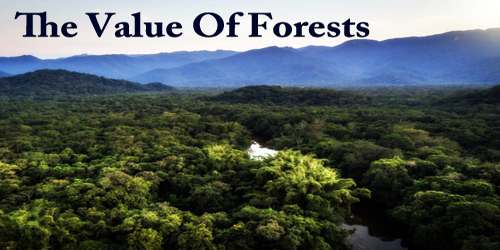 The Value Of Forests

Introduction: Forest is a large area of land covered by trees and woody vegetation. It plays a major role in maintaining the biodiversity and the ecosystem of planet earth. They are home to many wild species of animals, reputes, and insects. The climate, soil, and topography of the region determine the type of trees that grow in a forest. It helps to maintain the ecological balance and provide water, food, and shelter to all kinds of a living being. Forests cover 31 percent of the world’s land and they collect and store water. The trees standing tall in the forest hold the soil strongly to maintain the health of the soil. The trees help to balance the carbon dioxide emission by sucking them in and releasing oxygen for the organisms.

Importance (Ecological) of Forest: Life in Forrest is run by various factors like air, water, and sunlight. Also, there are a variety of plants that are available in Forests. Besides this, various trees, herbs, and shrubs depend on the climate of the forests. Also, there are plants that rely on animals for processes like seed dispersal and pollination. It is rightly said that for the earth to be a healthy place, at least one-third of the whole land area should be covered with forests. Trees absorb carbon from the air in the sunlight and turn it into food for themselves. In return, they release oxygen in the air which is so essential for the human and animal world. The existence of men, animals and even the plants is impossible without a fair amount of oxygen in the air. If the trees are cut down ruthlessly, the balance of oxygen in the atmosphere is disturbed and it has serious repercussions.

Trees check floods and soil erosion. In forests, the dense undergrowth ensures the preservation of water which gets released slowly into plains, valleys and living habitations. A large number of wild animals also live in forests. Birds build their nests in trees. If there are no trees, the life of these birds and animals will be endangered. In addition, forests give us a large number of raw materials for various products like paper, rayon, gums, medicinal drugs and more. Other than that, forests are also a major source of employment for a significant population. For example, people are involved in their protection, harvesting, regeneration, raw material processing and more.

Moreover, forests are largely responsible for preserving the physical features of our planet. They monitor soil erosion and prevent it from happening. Further, they alleviate floods by making the streams flow continually. This, in turn, helps our agriculture to a great extent.

Most importantly, forests are a habitat for wildlife. They provide them with shelter and food. Thus, it is quite important to protect forests and furthermore enhance the forest cover for a greener and sustainable future.

Benefits of Forests: Forests help in maintaining the oxygen and temperature levels of the atmosphere. Plants during photosynthesis release oxygen whereas it consumes carbon dioxide. This is the complete phenomenon that humans do. Also, forests are a huge reserve of trees and plants. Thus, they help by playing a significant role in balancing the oxygen level of the entire atmosphere.

Furthermore, forests help in maintaining the oxygen cycle on the planet Earth. The water through the soils is absorbed by plants through their roots. Thus, the release of excessive water by the plant into the atmosphere in the form of water vapor is called the transpiration process.

So, in this process water vapor from the ocean rises and gets condensed in the formation of clouds is called precipitation. Thus, it eventually leads to the formation of rainfall. So, all these processes come together to form the water cycle where the forest plays a significant role. Forests also help in preventing the global warming levels of the Earth. The increase in the amount of carbon dioxide which is a greenhouse gas into the atmosphere results in the greenhouse effect on Earth. Thus, it is majorly responsible for causing global warming on Earth.

Additionally, forests prevent soil erosion on Earth. There are trees that are present in the forests that bind the soil strongly from the roots. Thus, this results in soil being prevented from erosion.

Conclusion: In short, forests are a great blessing of nature. Various types of forests are home to a thousand animals and also means of livelihood for numerous people. And trees are so essential for us. They should not be cut, but more and more trees should be grown instead. We must recognize the importance of forests and take proper measures to tackle the issue of deforestation.