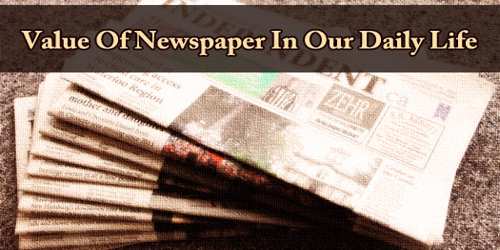 Value Of Newspaper In Our Daily Life

Newspapers are being read since decades. They created a revolution when they were first published as they connected people living far and wide with each other. These acted as a tool to spread awareness about what was happening in different parts of the country as well as other parts of the world. Though many people may have switched to news websites and apps, we cannot deny that the newspaper still holds an important place in society and is valued by many. Reading newspapers is a ritual for many people. They are unable to begin their day without going through the pages of the newspaper. A newspaper is one of the first things they need after they wake up. Newspapers are an essential part of modern civilization, even without the newspaper, the morning tea also not liked. With the advent of the media, the popularity of newspapers has become very less. But the effectiveness of it still persists. Today morning starts with a newspaper and ends with a newspaper. It is the effect of Newspapers that we come to know about the world. Its main purpose is to let us know about world problems and their solutions. Its main objective is to keep the readers informed about the latest developments that are taking place in the world. It investigates and then presents important events. It also guides and molds public opinion. It also provides space for public grievances. It educates the people on good citizenship. A newspaper also provides information on a variety of subjects like art, science, business, sports, crime, fashions, etc.

Every single bit of information that we get from the newspapers is of great importance. It makes us aware of what’s happening in the region we live in our country we live in. There is a separate column for health. Most newspapers have cartoons, comics, crossword puzzles, and astrological facts. Newspapers also contain matrimonial columns, vacancies, and wanted columns. Students are especially asked to read a newspaper daily. This is because it offers them numerous benefits. Firstly, it improves reading skills. It also helps in developing good writing skills since it enhances vocabulary and improves grammar. Besides, it is one of the best ways to increase general knowledge which is helpful while giving competitive examinations. Games such as crossword puzzles and Sudoku test their analytical and observation skills as well as their knowledge. Newspapers hold great value for the retired people. These are in fact read the most by these people. One of the reasons for this is that these people are from the time when there was no internet. A newspaper was the only source of news during that time. So, they are habitual to it. Even though many of them have learned how to use the internet, they still prefer newspapers over e-news. Most of their leisure time is spent in reading newspapers.