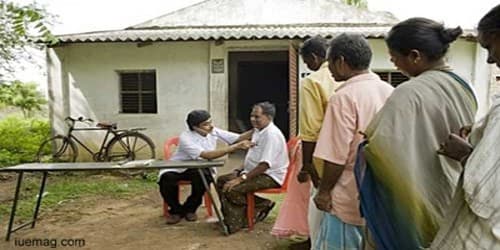 A village doctor is a person who gives treatment to the village people at a cheap cost. He is a familiar figure in the villages. He is a person who gives medicine and treatment with his little knowledge of the village people. Generally, he is not a registered doctor. He receives some training by working under a qualified doctor for some years. He has a dispensary in his house. He gets up early in the morning and attends his patients. Ile treats his patients very carefully. He gives them advice and medicine. The importance of a village doctor is simply great. His primary treatment saves a lot of valuable lives. His humanitarian work helps us to do better for society.

Generally, he opens his dispensary early in the morning and begins to attend to the patients. After finishing his duty there, he goes out to see other patients in the villages. Sometimes he spends the whole night sitting beside a patient. His presence and affectionate touch fill the patients with hope and courage. He takes small fees from the patients. Sometimes he gives free treatment to the poor. He is very active, punctual and dutiful. He gets up early in the morning. A village doctor works with a qualified doctor for a few years and receives training under him. Then he comes to his native village and begins practicing as a doctor. He has not a large stock of medicines in his dispensary. His dispensary offers a poor representation with one or two worn-out almirahs, an old wood chair, a cracked table, and one or two seats.

However, a village doctor sometimes does bad to the patients by giving wrong treatment as he has little knowledge in medicine. Sometimes he prescribes wrongly and the patients die. He cannot buy all the medical instruments and medicines because of his financial constraint. Of course, he tries to avoid treating critical patients. Rich people in the village usually avoid going to a village doctor. They call him a quack. But it is true that a village doctor is a friend to the villagers. He is always at their side to provide the medical service. He passes a lot of time enquiring their health condition. He gives them advice free of cost. His treatment fee is very little. So, poor villagers love and honor him very much. And, the government should take the necessary steps to train him so that he can provide better treatment to the villagers.