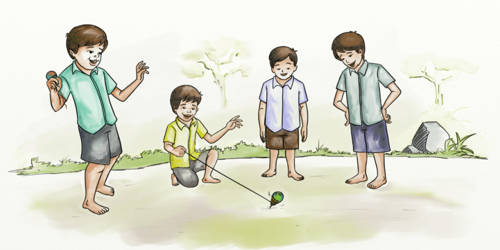 Every nation of the world has its own games and sports. They are as necessary for life as food and drink. Games and sports keep one physically and mentally fit. A man eats and drinks to fulfill his hunger and quench his thirst. But he takes part in games and sports to build up his body and character. They keep one away from diseases relating to heart, obesity, mental stress sleeplessness.

Ha-du-du is a very popular game. It is an outdoor game. It is a game of joy not only to the players but also to the spectators. It costs minimum but gives maximum joy and thrill, this game requires a small plain ground. Each team has an equal number of players. The players stand face to face on a line. Each team stands in one part of the ground. One player of a team is allowed to enter the ground of the opponent party. He utters Ha-du-du all the time holding his breath. He tries his best to touch one or more players of the opponent party. If he is successful in his attempt and comes back to his own area, the touched player or players are called dead.

Dariabandha is another popular game in our villages. It is another popular game in our villages. In this game, a field is made under certain rules equally divided with lines keeping equal distance from each other. Players are divided into two equal teams. One team stands outside the field and each of the players of the other team stands on each line facing at least one opponent player. Players standing outside enter into the field one by one and try to pass across the field to the finishing end. If any player of a team can cross the field from the starting point to the finishing point and vice-versa, the team concerned wins the game.

Lathi Khela is also a popular village game. This game requires some skills and tactics. The healthy and strong people of villages take part in this game.

Boat-race is a popular entertainment of the people of our villages. Generally, a boat race is held during autumn on the occasion of any village festival. It is really exciting and thrilling.

Country games are very interesting indeed. A player develops team spirit, he learns to adjust to other person’s shortcomings.  They can be played without spending much money. They are a source of innocent joy and pleasure. They make us strong, healthy and active. Village games are part of our culture and heritage. Such an approach would help one reorganize one’s skills and work harder with renewed vigor, to achieve one’s goal. We should play games to uphold our age-old culture and heritage.