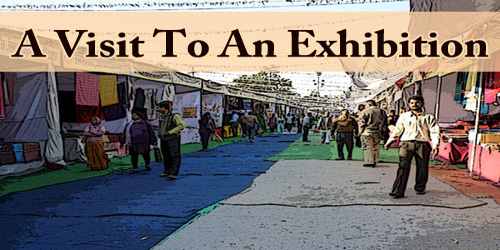 A Visit To An Exhibition

Last month a grand exhibition was held in our city. A large number of people came to see the fair. There was a large crowd of people outside the gate. My friends and I went to see it in the evening. Our first impression on entering the grounds was that the whole thing looked like a fairyland. The vast space was decorated in magnificent, bright, and purple colors and lit up with countless lights. Men, women, and children were moving from corner to corner, admiring the beauty of all kinds of stalls set up. These stalls were like small shops. The exhibitions lasted for about a week and were attended by thousands of people. Buying and selling worth thousands of money was done. The district authorities were pleased with its success. First, there were agricultural exhibits that the farmers had displayed. There were vegetables of all kinds and sizes. One farmer had a peculiar pumpkin which was praised by everybody. I was surprised to see a plum with resembled a red apple. There was also exhibited a fine specimen of cereals which attracted much attention. There were also remarkable specimens of carrots and radish, sweet potatoes and tomatoes of different tastes and colors. Specimens of local pottery and tableware were also exhibited. There were pots made by rustic artisans. We saw apples, oranges, tomatoes, almonds, raisins, and cardamoms of such fine shapes and colors that we could hardly distinguish them from the real ones. The different shade of color was so beautifully laid that they deceived even the sharpest eye. They received praise from all and the artist that made them was awarded a gold medal. There were textile products manufactured by local weavers. Their delicacy of texture and finest of finish astonished us beyond any measure. We saw a piece of silk cloth which could beat in shimmer even the finest silk of China or Japan. The muslin made by a local weaver was so light and fine that it appeared as if it were a relic of the ancient Dacca art. The exhibition was a success in every way.

While the stalls made a very interesting sight, what attracted us most was the Children’s Corner in the exhibition. The Children’s Corner was crowded with boys and girls. All types of amusements could be seen here. Children and some grown-ups were enjoying the giant wheel, wooden hoses, dodge-cars, railway train, and other things. There was plenty of entertainment in it. Ice-cream stands were in plenty in the area. Everybody was having a most thrilling time there. I too had my share, of fun with my friends. We felt like buying up the whole exhibition. However, we bought a few things, such as stuffed birds, woodcarvings, foods, and so on. Time flew like it never did while we were at the exhibition. Soon it was nearly midnight. So we left the exhibition and went Home, cheerful and happy.