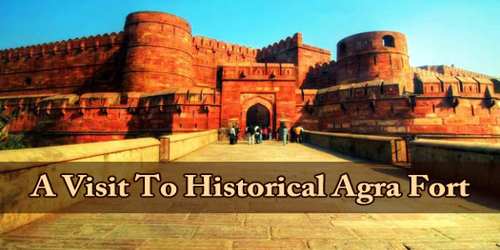 A Visit To Historical Agra Fort

Last year, during the winter vacation, I had a chance to visit the Agra Fort, in the company of some friends. It is an important historical building. Agra Fort is a historical fort in the city of Agra in India. It was the main residence of the emperors of the Mughal Dynasty until 1638 when the capital was shifted from Agra to Delhi. Before capture by the British, the last Indian rulers to have occupied it were the Marathas. In 1983, the Agra fort was inscribed as a UNESCO World Heritage site. It is about 2.5 km northwest of its more famous sister monument, the Taj Mahal. The fort can be more accurately described as a walled city. This fort was built as a military base by Akbar and was converted into a royal residence by Jehangir, his descendant. This structure is very famous for its intricate architectural beauty, which took 4000 workers over a span of eight years to build. This fort’s location was chosen for a strategic defense location. Since the ancient times, this fort has been a gem in the eyes of all the rulers and invaders.

In the 16th century, Babur, the first Mughal ruler defeated Ibrahim Lodi and captured the palace. He then converted the palace into a small fort and added many modifications to the fort-like huge step-well. Due to its strategic location, the fort became an important landmark for the Mughals. After Babur’s death, the Mughal Empire was a little shaken and other dynasties started to attack the fort. In 1540, Sher Shah Suri captured the fort from Humayun and made a few changes. Later, it was owned by Hemu Vikramadiya. Humayun’s son, Akbar defeated Hemu and took over the fort. By that time, the fort was disintegrating from its original beauty. The bricks from the fort were no longer strong enough to withhold the structure. Thus, Akbar decided to re-build the fort with sandstones. Akbar built many palaces, courtyards, and other structures of the fort. In 1785, the Maratha Empire fell to the ground in the battle with the British, during the Second Anglo Maratha War. British took control of the fort and used it as a barrack and army site until 1947, after which, it became the property of the Indian Government.

The 380,000 m2 (94-acre) fort has a semicircular plan, its chord lies parallel to the river Yamuna and its walls are seventy feet high. Double ramparts have massive circular bastions at intervals, with battlements, embrasures, machicolations, and string courses. Four gates were provided on its four sides, one Khizri gate opening on to the river. Two of the fort’s gates are notable: the “Delhi Gate” and the “Lahore Gate.” The Lahore Gate is also popularly also known as the “Amar Singh Gate,” for Amar Singh Rathore. As we walk towards the eastern side, we will find Khas Mahal, a marble pavilion and pool, which was the residence of Shah Jahan. From this palace, we can get a good view of the Taj Mahal. The second courtyards called as AnguriBagh. This garden runs downs to a flight of stairs, which would lead to underground passages and rooms. To the northeast of the courtyard, we will find the Mirror Palace. To the north, we can spot the octagonal tower, Mathamman Burj. This is the place where Shah Jahan was imprisioned. Visitors can get a good view of the Taj Mahal from this palace. Walk towards the third courtyard and you will find Hall of Private Audience, which once hosted the Peacock Throne of Shah Jahan. Walk towards the northern side of the courtyard and we will find Nagina Masjid, a mosque for the women of the royal family. Further, we will find Ladies’ Bazaar and the Hall of Public Audience. We will find a small grave of John Colvin, a lieutenant governor of the British, who died inside the fort. That is the end of access to the public. It was my first visit to this historical monument. We returned home unwillingly and carried away in my mind a happy memory of my visit to this beautiful mausoleum of exquisite workmanship.