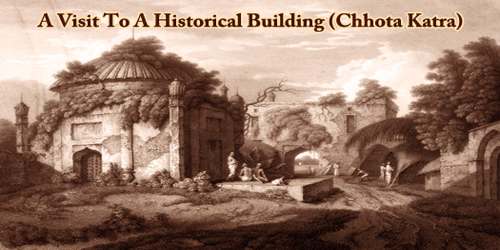 A Visit To A Historical Building (Chhota Katra)

Chhota Katra (Bengali: ছোট কাটারা; Small Katra) is situated about around 183 meter east of the Bara Katra at Hakim Habibur Rahman lane on the bank of the river Buriganga in Mughal (old) Dhaka. Chhota Katra is slightly smaller than Bara Katra. It is one of the two Katras built during Mughal’s regime in Dhaka, Bangladesh. It was constructed in 1663 by Subahdar Shaista Khan. Katara is a form of cellular dormitory built around an oblong courtyard; the form originated in Persia, and like many other things Persian and middle-Asian that the Mughals introduced in this subcontinent, this was copied in Northern India, the home of some of the rulers, members of the Royal Court and the nobility. However, the term may have been derived from Arabic word Katara which meant colonnaded building or could be a corrupt French word used for a residential quarter. Other synonyms of it are Chuttre (French) and Chatrra (Hindi), both meaning Umbrella, were used for a place that sheltered Pilgrims.

The Katra is rectangular in plan, 101.20m x 92.05m externally, and 81.07m x 69.19m internally. The thickness of the outer walls is 0.91 to 1.00m and the maximum thickness of the bastion walls is 1.22m. It is similar in plan to that of the Bara Katra but is smaller in size. There are two gateways, one on the north and the other on the south. The southern one is the main entrance. Both the gateways, though much altered recently, are still in situ. In the two outer corners of the south wall of the structure, there are two octagonal towers. The structures around the open courtyard have undergone many renovations, reconstruction, and repair. Many modern extensions were also added to the original building. The three-storeyed gateways on the riverside have assumed some colonial features. The triple windows and the lofty angle towers reflect the colonial influence during subsequent restoration.

An interesting account of a small mosque that may have once existed within the serai is found in Charles D’Oyly’s “The Antiquities of Dhaka”. He says: “Its minarets rise somewhat like the shafts of elegant octagonal columns, and are terminated by capitals of oriental foliage and fruit. The base of a large round column, which is placed beside the entrance, has a light, singular, and fanciful effect, seeming to stand as if on a vase. The dome is beautifully fluted”. Chhota Katra was built in between 1663 and 1671. During the first reign of Shaista Khan, then Subahdar of Bengal and a patron of a civic and religious building that gave to the architectural style appropriately named after him. Since the shift of Mughal capital in 1713, the Katra started to lose its importance along with the city, though the Naib Nazim Jissarat Khan briefly stayed here before his palace, or rather a mansion of which nothing much is now left was built in 1765 in Nimtali in the city just overcoming anarchy. It is also said that the Katra was constructed to accommodate some officials and also a part of Shaista Khan’s expanding family. Besides this Katra, there were several more such cellular structures mainly used as inns or residential enclaves, for example, Maya Katra, Muqim Katra, Nawab Katra, etc. These Katras are the few reminiscences of residential quarters in Dhaka or elsewhere in Bengal built during the Mughal period. It is evident that the structure (Chhota Katra) has lost much of its original look through indiscriminate alterations and unworthy restoration, though they have given it some durability. The two Katras of Dhaka has not been taken under the protection of the Department of Archaeology, and the specimens of this type of architecture in Bangladesh are on the verge of total extinction.