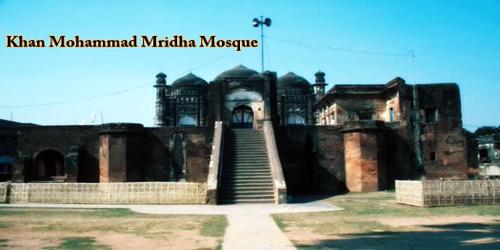 A Visit To A Historical Building (Khan Mohammad Mridha Mosque)

The Khan Mohammad Mridha Mosque (Bengali: খান মোহাম্মদ মৃধা মসজিদ) is a historical mosque, and it is an archaeological site located in southern Dhaka, near Lalbagh fort. The mosque is located approximately 500 meters west of the Lalbagh Fort. The mosque is situated at the western part of the complex which also includes a graveyard and a garden. During its inception, the mosque was probably the center of a robust neighborhood. The mosque rises above its surroundings because the tahkhana or underground rooms of the mosque are above grade. The roof of the tahkhana forms the platform on which the mosque is situated. The spacious prayer place before the main mosque is open in all directions allowing air to flow and keep the Musullis cool. The date of the mosque can be traced back to 1704-05 AD based on the Persian inscriptions on the central archway and over the central mihrab.  It was built by a noble, Khan Muhammad Mirza, during the rule of Farrukh Siyar, the Deputy Governor of Dhaka. The mosque was probably constructed by the order of Qazi Ibadullah, the chief Qazi of Dhaka.

The Khan Mohammad Mridha Mosque represents a typical Bengali platform mosque; that is, a three-domed mosque sits on a rectangular raised platform. The platform is 16′-6″ above the ground level. The tahkhana comprises of vaulted rooms for living purposes. Area wise, the mosque occupies only a small portion of the platform. In this structure, the platform is square with parapets adorned with betel leaf motifs. Probably intended to be a madrasa, the large arched cells underneath the 5.8 meter- high platform were used for living purposes. The space underneath the platform was arranged with a single bay of vaulted rooms accessed from a vaulted passageway on the periphery of all sides except east. The platform is accessed by a straight flight of stair of 25 steps on the east leading to a double-arched gateway aligned with the central bay of the mosque. Two large engaged octagonal turrets were positioned symmetrically on each side of the stair. On the platform, along with the mosque, an ancillary structure is positioned on the north, probably used for multiple purposes. Externally the mosque is a rectangle of 49’10” x 23’5″ while internally it has an oblong plan of 39’8″ x 12’8″. The structure is divided into three equal interior bays, roofed over by three fluted, bulbous domes, resting on drums. The proportionately smaller lateral domes are placed on the equal size bays by splitting each dome into a half-dome and placing it on a pendentive.

An open area for prayer is located before the mosque, allowing for cool airflow. The prayer hall of the mosque has three domes. Above the central archway and the central Mihrab are Persian inscriptions that describe the details of the construction of the mosque. The prayer hall entrances feature multi-cusped arches and detailed columns. The interior is divided into three bays by two lateral arches. Each bay contains a mihrab that is marked by a multi-cusped arch within a rectangular panel. To the north of the structure is a madrasa (religious school) with a hujra (arcaded hall) where visitors are permitted to stand or sit. The garden is well-maintained and filled with resplendent flowers. A well in the northern portion of the garden once used for supplying water for ‘Ozu’ a way of becoming fresh before prayer is now abandoned; while the south is home to an ancient palm tree a testimony to the many years the mosque has remained standing. The Khan Mohammad Mridha Mosque was named a historic monument in 1913. Since then it has undergone a number of restorations, some of which have been controversial in nature. However, it remains a fascinating historic and religious site that visitors can view when touring the better-known Lalbagh Fort in Dhaka just down the road. The mosque was restored and repaired by the Department of Archaeology, Bangladesh, and is now a protected monument.