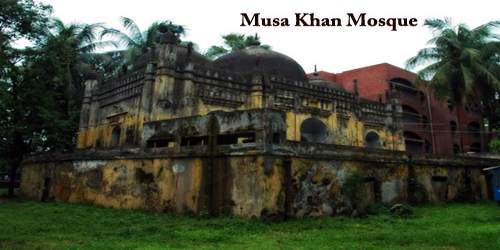 A Visit To A Historical Building (Musa Khan Mosque)

Musa Khan Mosque (Bengali: মুসা খাঁ মসজিদ) is one of the few Mughal structures on Bangladesh that stands in the southern part of the country’s capital Dhaka. The date of construction of this rectangular platform mosque cannot be confirmed, as the inscription tablet over the central doorway is now missing. Based on stylistic reference, the mosque was possibly built during the reign of Shaista Khan or even later by Dewan Manawar Khan in memory of his grandfather Musa Khan. Most probably it was built during the second half of seventeenth century CE. The Musa Khan Mosque is located on the western side of Shahidullah Hall, Dhaka University, and within 500 meters of the Khwaja Shahbaz Mosque. It was quite unsure about the original time when it was built. Musa Khan died during 1623, but the structure of the mosque is almost similar to the Khwaja Shahbaz’s Mosque and it was built during 1679. So neither the date nor the builder of the mosque is confirmed. Some people believe this one was built by either Shaista Khan or even later by Dewan Manawar Khan. A high vaulted plinth with a three-domed mosque above and the grave of Musa Khan to its northeast comprise the mosque complex of Musa Khan. The whole complex was once enclosed by an outer wall, now completely gone. The Musa Khan Mosque represents a typical Bengali platform mosque; that is, a three-domed mosque sits on a rectangular raised platform. The mosque is a typical Bengali Mughal type where the central dome is larger than the other two.

The mosque has a vault platform, and over this plinth the main architecture of the mosque is planted. The vaulted platform, 3.05m high, gives an outside measurement of 17.68m from north to south and 14.02m from east to west. Underneath the platform there are a series of rooms, now badly damaged. In the eastern side are three independent rooms, each of which could be entered from the east by a single archway. Each of these rooms is again divided into two halves by a wide north-south horizontal arch. Further beyond on the west are three independent rooms, each being connected with the eastern one by an archway. The southernmost room in the eastern side has an additional opening on the southwestern corner, which leads to a narrow passage along the southern side underneath the platform. The passage ends with a small opening on the southwestern corner of the plinth. All these rooms contain bookshelves at the waist of the walls. In the western side below the plinth are three other independent rooms, each opening towards the west by a single archway. In these three rooms, having the same constructional peculiarities like those in the eastern side, now reside some madrasa students. The western wall is internally recessed with three semi-octagonal mihrab niches, which are all arched. The arch of the central mihrab is multi-cusped, while the others are of plain four-centered. The larger central mihrab is projected outside having usual ornamental turrets. The mosque is now under significant threat due to a metro-rail project of the government of Bangladesh and is included in the list of 75 structures that may face serious consequences due to the metro-rail.