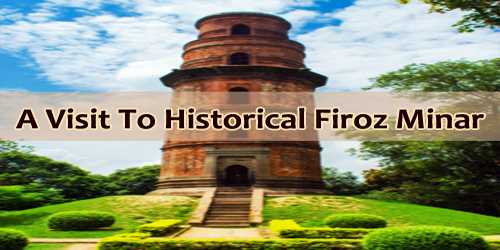 A Visit To Historical Firoz Minar

Last year, during the winter vacation, I had a chance to visit the historical ‘Firoz Minar’ (also known as Firuz Minar; English: Tower of Firoz/Firuz), in the company of some friends and cousins. It is a five-storeyed tower situated at Gaur, West Bengal, India. It was built by Sultan Saifuddin Firuz Shah of the Habshi dynasty between 1485 and 1489. It was built in the Tughlaqi style of architecture. Although the first three storeys are dodecagonal, the final two are circular in shape.

Alternately known as ‘Firoza Minar’ or ‘Blue Tower’ this tower 25.60 m high with spiral staircase having 73 steps was probably constructed by Saifuddin Firoz an Abyssinian commander of the royal forces who became the Sultan by avenging the killing of Sultan Jalaluddin Fath Shah, the last ruler of the Iliyas Shahi dynasty. The minar is located one kilometer away from the Dakhil Darwaza at the city of Gaur. Gaur is at a distance of 16 kilometers (9.9 mi) from English Bazaar and is situated at the Malda district in the Indian state of West Bengal. From the foot of the door, the tower rises in three storeys of twelve sides, each storey demarcated by ornamental bands. The fourth and fifth storeys are circular with reduced diameter. The last storey originally an open arched room covered by a dome has been changed into an open flat roof by some restorer. This is considered as a victory tower as its builder is credited with many victories in battles. Scholars attribute it as a Bengali version of the Qutb Minar (1486 – 89 AD). The minar is built in Tughlaqi architecture and there are terracotta works on its walls. The tower sits on top of a masonry plinth. The position of the minar in relation to the destroyed mosque is, in fact, the same as that of the position of the Bayana and Vijaymandargarh minars to their mosques. Moreover, Ghulam Husain Salim’s information that ‘a mosque, a tower and a reservoir’ were erected by Sultan Firuz Shah leaves us with no doubt that the Firuz Minar was a majana. This is the exact description of the destroyed mosque and the surviving minar and the tank to its east. The top of the minar was probably used at a later date by some pir (saint) for i’tikaf (meditation), and hence is sometimes known as Pirasa Minar. The local epithet Chirag Minar (chirag=lamp) probably has its origin in the muajjin’s lamp hung to indicate the time of prayers and for other purposes.