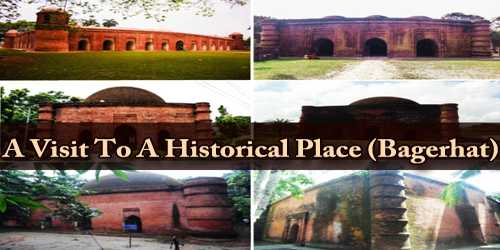 A Visit To A Historical Place (Bagerhat)

Introduction: Traveling is always fun and if it’s with your family then it’s really so much fun. I always appreciate my family as the best family and they are really supportive of me. Man is not satisfied with what he has seen and known. He wants to see and know more. He wants to get the flavor of the historical places, So as a student I have a keen interest to know the historical places of my country. Whenever I get an opportunity, I visit a place of historical interest. During the last winter vacation, I got such an opportunity to visit Bagerhat, a place of great historical importance.

Historical places: In Bangladesh, there are some historical places. They are now regarded/declared as the World Heritage Sites. The Sundarbans, Mahastangarh, Kuakata, the Buddhist Vihara at Paharpur, Sonargoan, Bagerhat, etc. are the places of historical importance. Each place has its specialty and importance.

History of Bagerhat: Bagerhat is a great historical place. Hazrat Khan Jahan Ali founded this town. He was a just ruler and great saint of the fifteen century. At the time of his reign, Bagerhat was a part of the Sunderbans. He built many official buildings to run his administration. He also built many mosques and dug tanks. The buildings erected by him are now all in ruins. When I saw these historical buildings, my joys knew no bounds.

On the tomb, there are inscriptions in Arabic. Inspiration says that he died on 25th October 1459. There is a small mosque nearby. A close associate of Khan Jahah Ali was buried outside the tomb. On the night of the full moon in the month of Chaitra, a big fair is held beside the Mazar. Many people from different parts of this country visit the fair.

The Shatgambuj Mosque: I also visited the Shatgambu Mosque. It is an Islamic edifice. It is a big and beautiful building. It is still in good condition. It stands on sixty stone pillars with its seventy-seven domes. They are made of stones. The mosque is beautifully decorated. It is said that it was used as a mosque by Pir Khan Jahan. Besides being used as a prayer hall the mosque was also used as the court of Khan Jahan Ali.

Khan Jahan Ali adorned the city of Bagerhat with numerous mosques, tanks, roads, and public buildings. The interior and exterior of the mosque give a view of rather plain architecture but the interior western wall of the mosque was beautifully decorated with terracotta flowers and foliage. The mosque has a great attraction for tourists and visitors.

The Ghora Dighi: There is a big dighi near the Shatgambu Mosque. This dighi is called the Ghora Dighi. It is said that a horse was made to run before digging the Dighi. The horse ran straight and stood covering a certain distance. That distance was accepted as the length of the Dighi. That is why the Dighi is called Ghora Dighi. I visited this Dighi and came to know many things about the social works and reformations of Khan Jahan Ali.

Conclusion: Bagerhat is really a place of historical interest. I spent 2 days there with my family and saw many historical things and enjoyed them very much. Now it is one of the World Heritage Sites. I left Bagerhat but the memory still haunts my mind.