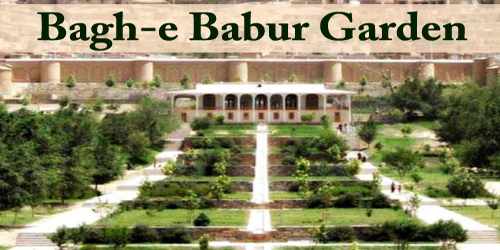 A Visit To A Historical Place (Bagh-e Babur Garden)

Bagh-e Babur Garden (Persian: باغ بابر‎ / bāġ-e bābur) commonly known as The Garden of Babur is located on the slopes of Kuh-e Sher Darwaza, southwest of the old city of Kabul, Afghanistan. It is a historic park in Kabul, and also the final resting-place of the first Mughal emperor Babur. Although present-day Afghanistan was not Babur’s original homeland (he was born in Ferghana in present-day Uzbekistan), he felt sufficiently enamored of Kabul that he desired to be buried here. When Babur died in 1530 he was initially buried in Agra against his wishes. Between 1539 and 1544 Sher Shah Suri, a rival of Babur’s son Humayun fulfilled his wishes and interred him at Babur’s Garden. The headstone placed on his grave read “If there is a paradise on earth, it is this, it is this, and it is this.” The garden is thought to have been developed around 1528 AD (935 AH) when Babur gave orders for the construction of an “avenue garden” in Kabul, described in some detail in his memoirs, the Baburnama.

The garden is c. 11.5 ha large and arranged in 15 terraces along a central axis in an east-west direction. From the top terrace, the visitor has a magnificent vista over the garden and its perimeter wall, across the Kabul River towards the snow-covered mountains. The present garden extends over fifteen orchard terraces that descend westward towards the Kabul River. The overall layout is rectangular in plan, with an extension containing a caravanserai and another containing the burial terraces at the foot and head of the central axis. The site measures about three-hundred meters at its widest (north-south) and four-hundred and sixty meters at its longest (east-west).

The original construction date of the gardens (Persian: باغ‎ – bāġ) is unknown. When Babur captured Kabul in 1504 from the Arguns he re-developed the site and used it as a guest house for special occasions, especially during the summer seasons. The garden was laid out as a series of 15 stepped terraces on a hillside in southwest Kabul. Its axis points toward Mecca. Babur’s grave is located on the fourteenth terrace and was originally surrounded by a screen of white marble. Although the screen was destroyed by warfare and vandalism in the 20th century, it was rebuilt between 2002-06 by the Aga Khan Trust for Culture following a drawing by Charles Masson in the 19th century.

Bagh-e Babur fell into disrepair during the decline of the Mughal Empire, and its structures were badly damaged within the 1842 earthquake. Late 19th century a garden pavilion was built over the central axis, which was remodeled with seven parterres and fountains. At the identical time, an oversized palace was inbuilt the southeast corner of the garden. The location was badly damaged during inter-factional fighting in 1992/3 when most of the trees died or were bog down for firewood. The garden was re-opened to the general public within the spring of 2002, at the start of restoration works implemented by the Aga Khan Trust for Culture (AKTC).

The garden was converted into a public park during the rule of Nadir Shah in the 1930s with the construction of pools, reservoirs, and flower gardens down the central axis of the landscape. Finally, a modern swimming pool and greenhouse were constructed in the 1980s. In addition, a new caravanserai was built on the footprint of an earlier building at the base of the garden (where the base of a gateway built by Shah Jahan has been preserved) and a new swimming-pool outside of the garden precinct.

Bagh-e Babur belongs to the category of Islamic gardens. The Islamic garden subscribes layers of context embedded in religious symbolism that separate them from their European counterparts, given the fact that they may have shared intellectual, social and political aspects. Since 16th January 2008, the garden has been managed by the independent Baghe Babur Trust and has seen a major increase in visitor numbers. Nearly 300,000 people visited the location in 2008 and about 1,030,000 people visited the positioning in 2016. As of 2010, it’s located in Kabul’s District 8, southwest from the old city.