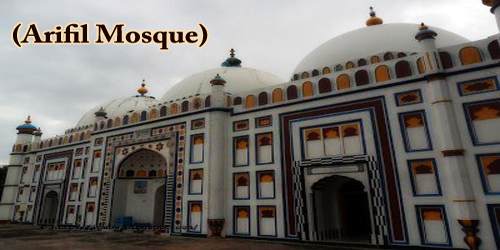 Arifile Mosque (Bengali: আড়িফাইল মসজিদ, Arabic: مسجد عارفايل‎) is located about half a kilometer to the southwest of the Sarail Thana headquarters of Brahmanbaria district, Bangladesh. Shah Arif built the mosque in 1662; the name derived from Arif to Arifile; known locally as the ‘Arail Mosque’. The mosque, a protected monument of the Bangladesh Department of Archaeology, is now in a relatively good preservation state. Built at the western fringe of a raised piece of land on the southern bank of an oversized tank called Sagardighi, the mosque forms an outsized oblong structure (24.38m by 9.30m); its walls are about 1.60m thick. Before of the mosque could be a paved court enclosed by an occasional wall with a contemporary gateway within the east.  The four huge octagonal towers that have reinforced the building’s four exterior angles are held high above the horizontal parapets and overlapped with ribbed cupolas with kalasa finishes. This is an example of Mughal architecture, which combined Bengali, Persian and Islamic influences. The mosque floor occupied by 24.38 m x 9.30 m rectangular area, and height nearly 8 m. Two bigger domes built on the roof keeping the middle main dome supported rectangular structure inside the mosque like half domed vim. Out of 5 exits, three within the east and everyone within the north and side, the center’s main door is larger. All Mihrabs are close in size with the exception of Middle West depth. Ancient echo system applied here by smooth polishing of the inside floor, walls, mihrabs, and domes to represent equal addresses of each corner.

The interior of the mosque forms a broad rectangular space and is divided by two long transverse arches of a simple four-centered kind into three equal square bays. The roof is covered by three large domes, one above each bay. The domes are placed directly on octagonal drums and are crowned with beautiful expanded lotus and kalasa finials. Arifile Mosque stands a large water resort in the south-east of Sagardighi. It was discovered between 2009 and 2010 and repaired. Half domed vim and mid mihrab decorated with stucco works of muqarnas. Local traditions report that one saint Shah Arif founded the mosque, but it’s not exactly known when the saint had flourished or died here. Whatever the saint or the founder, the plan mosque and other building details are very similar to the Dhaka Mosque of Khwaja Shahbaz (1679). And sometime in the late 17th century, it appears to have been built from its style.