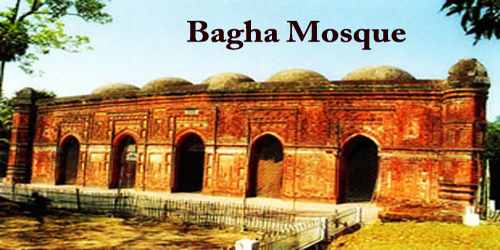 A Visit To A Historical Place/Building (Bagha Mosque)

Bagha Mosque (Bengali: বাঘা মসজিদ) is a mosque situated at Bagha, about 40km southeast of Rajshahi town, survives in a fairly good state of preservation. The mosque was built on the western bank of a fairly large tank within a brick-walled compound, 48.77m square. The mosque compound could be entered by two old arched gateways one on the north and the main one on the south comprising a simple oblong curved structure with a turret on either side. This brick-built mosque, now a protected monument of the Department of Archaeology, Bangladesh, is an oblong structure measuring externally about 23.16m by 12.80m. It is a great historical place in Bangladesh. It has a wonderful architectural style. One of the remnants of its glorious past has survived the wrath of time and it is considered one of the most significant and beautiful archeological sites of Bangladesh. It is the Shahi (grand) mosque of Bagha, the most beautifully decorated mosque built in the independent sultanate period of Bengal. The four exterior angles of the building are emphasized with octagonal towers, divided into sections by molded bands, and topped over with polygonal solid cupolas. The cornice of the building is gently curved in the Bengali fashion.

Surrounded by an ancient freshwater lake, beautifully landscaped orchards, ancient ruins, graveyards of the saints who preached Islam in this area, and with a recently built museum, the mosque along with its scenic premises is an ideal place to reminisce about Bangladesh’s prosperous history. Established by Nasrat Shah, the Sultan of independent Bengal, in the year of 1523-24, the mosque is well known for its depiction on the banknote of fifty taka. There are five arched openings in the east and two in both have the south and north sides. Inside the mosque, there are three mihrabs at the western end of the three southern bays, a paneled design in the fourth and a smaller mihrab in the raised gallery in the northwestern corner. The interior of the mosque is divided into two longitudinal aisles and five bays by a row of four stone pillars. The mosque has therefore ten independent square divisions, each being covered by an inverted cup-shaped dome. The mosque is famous for its magnificent terracotta ornamentation. There are also Arabic and Persian calligraphic inscriptions attached to the interior and exterior walls of the mosque. The department of archaeology has reconstructed the present domed roof, as the original roof had collapsed in the earthquake of 1897. The domes are carried on intersecting arches springing from stone pillars and engaged stone pilasters. It is important to note that the stone blocks in the form of a lintel at the springing point of the doorway arches run all around the building, which gives the mosque a two-storied appearance from outside. Many of the decorated terracotta tiles have been fractured and a lot of the beautiful patterns, damaged. There is only one caretaker to guard and maintain the mosque and its huge premises of 256 bighas of land. Due to its remote location, very few people are actually concerned about the maintenance of this significant and beautiful heritage site. The mosque and its picturesque premises will be able to attract a lot of tourists and history enthusiasts from home and abroad if proper maintenance is ensured.