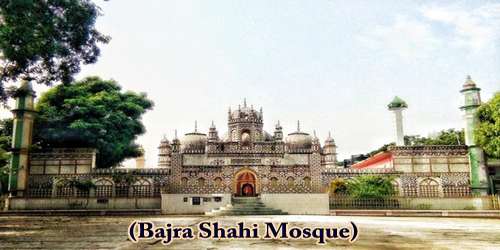 A Visit To A Historical Place/Building (Bajra Shahi Mosque)

Bajra Shahi Mosque (Bengali: বজরা শাহী মসজিদ, Arabic: شاهي مسجد بجرا‎) is located on the northern bank of a large pond containing a masonry ghat in the village of Bajra under Begumganj thana of Noakhali district, Bangladesh. It is an 18th-century mosque, and it’s been described because of the “most notable historical monument” within the area around Maijdee. The mosque is a sublime historic mosque. Amanullah built it during the 1741-42 AD and later it absolutely was repaired by the Bazra Zamindar named Khan Bahadur Ali Ahmad and Khan Bahadur Mujir Uddin Ahmad. The mosque is located in a rural setting 20 kilometers (12 mi) north of Noakhali, at the village of Bajra. The site is surrounded by an outer wall on the east with an ornate gateway, the whole being on the high ground on the west side of a dighi (reservoir). The Bengali and Persian inscriptions fixed over the gateway of the outer wall and on the within the wall of the mosque record that it had been thoroughly repaired within the years between 1318 to 1335 BS by the Bajra Zamindars Khan Bahadur Ali Ahmad and Khan Bahadur Mujir Uddin Ahmad. This mosque has a similar complexion of the mosques during that era. The most difference is that the stylish outer walls. It’s three domes at the top; the center dome is slight larger. The current ornamentation of the mosque with a mosaic of shards of China was also done at that point. The mosque is now in an exceedingly fairly good state of preservation.

The mosque has been built on the western 1/2 a raised platform, which is enclosed by an outer wall with a powerful gateway within the middle of the eastern side. Built of brick, the mosque is rectangular (16m by 7.32m) in plan, with the same old octagonal towers within the four exterior angles, while the thickness of its walls is 1.22m. The building has three arched doorways within the east and only one each on the north and south sides, all projected outside, with slender flanking minarets, but the projection and size of the central doorway within the east is larger and more prominent. The three eastern archways have multi-cuspings on the outer sides, each opening under a half-domed vault. There are three semi-octagonal mihrabs within the qibla wall in the axis of those eastern doorways, of which the central one is larger. On the eastern side, the mosque had a huge water tank, but now it is just diminishing to one percent of its original capacity. The southern side of the mosque incorporates a large graveyard. The inside is split into three bays by two multi-cusped arches. Above the roof are three bulbous domes on octagonal drums; all crowned with lotus and kalasa finials. The central dome, which is that the largest, is carried on small half-dome squinches on the upper corners. Half-domed vaults on the east and wall and therefore the triangular pendentives on the upper angles support the smaller side domes. The central mihrab has elaborate stucco ornamentation. Originally the building was covered with plaster, but at this time every a part of its minutely decorated mosaics of varicolored shards of China.