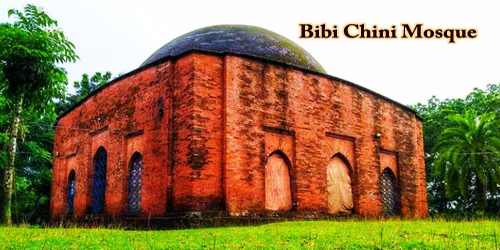 A Visit To A Historical Place/Building (Bibi Chini Mosque)

Bibi Chini Mosque (Bengali: বিবি চিনি মসজিদ, Persian: بی بی چینی مسجد‎) is one of the historical places in Bangladesh, it is an ancient mosque and archaeological site located in Barguna District. It is located in the Bibi Chini village under Betagi Upazila. This Mughal architecture style mosque was built by an Islamic preacher named Shah Neyamat Ullah. In 1659, A Muslim saint named Hazrat Shah Neyamat Ullah (Rah.) came here from Persia for Perching Islam in this region, when Shah Shuja was the governor of Bengal and Odisha. The village and the mosque named after the name of his daughter ‘Hayache Bibi Chini’. The mosque is 33 ft long, 33 ft width and the wall of the mosque is 6 ft wide. Shuja requested him to build this mosque. The village was named after Chini Bibi, daughter of Shah Neyamat Ullah. Since the mosque is located in the village, later it also became known as Bibi Chini Mosque. Three graves are located beside the mosque which is completely exclusion. Those graves are 40-45 ft. long. According to the local people, those graves are Hazrat Shah Naimat Ullah and his two daughters Chini Bibi and Isa Bibi.

In 1700, this great Muslim Saint Hazrat Shah Neyamat Ullah (Rah.) was died and buried him beside the mosque. The mosque was first renovated in 1985 by the Betagi Upazila administration. In 1992, the Department of Archaeology took charge of the maintenance and renovation of the mosque and listed it as an archaeological site.