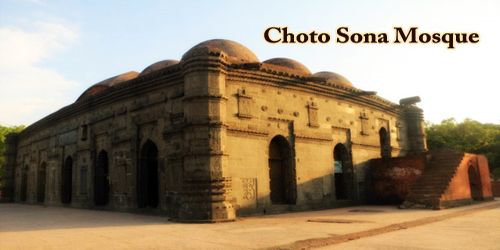 A Visit To A Historical Place/Building (Choto Sona Mosque)

Choto Sona Mosque (Bengali: ছোট সোনা মসজিদ, Small Golden Mosque) derives its name from the gilding that once graced the surface of the fifteen domes of this mosque. An inscription ascribes Wali Muhammad as the builder and it was erected during the reign of Sultan Husain Shah. The mosque sometimes described as a ‘gem of Sultanate architecture’ is situated about 3 kilometers south of kotwali darwaza and half a kilometer to the southeast of the tahkhana complex in the Firuzpur Quarters of gaur-lakhnauti, the capital of Sultanate Bengal. The mosque is one of the best-preserved sultana monuments under protection by the Department of Archaeology and Museums, Governments of Bangladesh. The gilding that gave the building its name does not exist anymore. The mosque premise, which covers an area of 42 m from east to west by 43.5 m from north to south, was originally surrounded by an outer wall (now restored) with a gateway in the middle of the east side. It is a simple rectangular structure its exterior measuring 82′ x 57′ x 20′ and its interior 70′- 4″ x 40′- 9″. In addition to four corner towers, there are two additional projecting buttressed towers that frame the back of the central mihrab. This brick structure is embellished with Rajmahal black stone facing on the exterior and this transition between materials is visible at the point where the domes begin. All arches and domes are of brick and the transition from the square to the circle of the drum-less domes are achieved with brick stalactite pendentives.

An inscription tablet still fixed over the central doorway records that the mosque was built by one Majlis-al-Majalis, Majlis Mansur Wali Muhammad bin Ali. The Arabic letters in the inscription, giving the exact date of construction, have been obliterated. But the name of Sultan Alauddin Husain shah (as written in the text…defender of Islam and of the Muslims, Sultan Ala al-dunya wal-din) suggests that the mosque must have been built sometime during his rule (899-925 AH/ 1493 -1519 AD). An important architectural feature is the high quality of stone carving done in shallow relief on the inside and outside walls. These are stone reproduction of highly developed traditional terracotta art of Bangladesh closely resembling woodcarving or filigree work. Many of the stones used for casing this mosque are of Hindu origin. This is evident from an architectural fragment taken and now kept in the British Museum which shows the image of Buddha on one side and shallow diaper design of Muslim workmanship on the other showing traces of gilding. According to local legend, this mosque was once richly decorated with gilding and gold paint in the tile decoration.

The interior of the mosque, measuring 21.2 by 12.2 meters (70 by 40 ft), is divided into three aisles by two rows of stone pillars, four in each row. A wide central nave has cut the aisles into halves, each half showing six equal square units with a side of 3.5 m. The nave has three rectangular units, each measuring 3.5 by 4.5 m. The interior of the mosque has therefore a total of fifteen units, of which the three rectangular units are covered with chauchala vaults and the remaining twelve square units each by an inverted tumbler-shaped dome. The domes are arranged in diminishing heights and this is achieved by varying the thickness of the domes. The gateway of the surrounding outer wall in the east, now thoroughly renovated, is 7.6m long and 2.4m wide, which is in alignment with the central doorway of the mosque proper. The entire gateway was originally veneered with stone but is now painted in stone-color. There is a ladies gallery or Badshah-ka-Takht on the north that is elevated on slender carved columns. It is a square, two-storied structure, and the entrance is from the northwest corner of the mosque through a porch that is elevated to the same height. The entrance porch was probably covered with a canopy. There is also a subterranean passage leading to the northern iwan just below the zenana gallery. On the southeast corner within the mosque, the premise are two modern graves, enclosed by a 1.3m high brick wall, 4.1m from north to south, and 4.7m from east to west. These two graves belong to Captain Mohiuddin Jahangir (d 14 December 1971) and Major Nazmul Hoque Tulu (d 27 September 1971), who died fighting against the Pakistani Army near Nawabganj town during the Bangladesh war of liberation. The glamour of the Chhoto Sona Masjid is not there as it was originally, particularly because of the stripping of the decorative mihrabs and the mosque courtyard, but the remains are nevertheless one of the most attractive monuments of Guar-Lakhnauti.