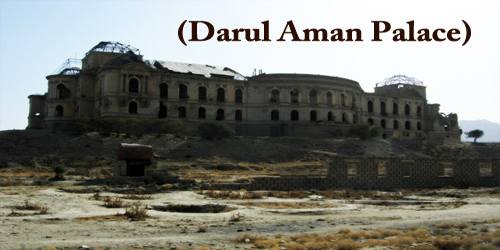 A Visit To A Historical Place/Building (Darul Aman Palace)

Darul Aman Palace (Persian: قصر دارالامان‎; Pashto: د دارالامان ماڼۍ‎), literally “The Abode of Peace” or “Abode of Amanullah”, is a western-style palace built by King Amanullah Khan to the southwest of Kabul. Built by King Amanullah Khan in the 1920s, the palace was intended to be the nucleus of a new modern-day Afghanistan capital. It is a palace about 16 kilometers (9.9 mi) south-west outside of Kabul, Afghanistan’s capital. It sits directly across from the Afghan Parliament, and is near the National Museum of Afghanistan and also the American University of Afghanistan. It absolutely was abandoned when the King was far from power. It absolutely was gutted by fire in 1969, so restored to deal with the Ministry of Defense. it absolutely was again gutted by fire within the coup of 1978. Amanullah Khan, ruler of Afghanistan between 1919 and 1929, ordered the development of the impressive structure, intending the palace to be the centerpiece of a brand new capital city within the country. The city was to be a gleaming village, European-style, growing up from the plains with the palace as the crown jewel. The palace is an elegant neoclassical building in the western part of the Afghan capital, on a hilltop overlooking a flat, dusty valley. Designed by French architects A. Godard and M. Gordad, as well as German architects; this was one of the country’s first buildings to get central heating and running water.

‘Darul Aman Palace’ is still standing today and is now a collapsing ruin. The Palace one of several targets launched in a series of attacks on 15th April 2012, for which the Taliban claimed responsibility. Finally, it was agreed to build a new building across from the palace to house the parliament under a grant from India; work ended in 2015. The palace could be a U-shaped brick building, in-built a European neoclassical style. It has 3 levels, including a semi-circular main hall, and 150 beds. The highest point is about 33 m (108 ft) above ground level. The roof features four domed towers. A number of Corinthian columns decorate the galleries on the third floor of the southern facade. There are marble spiral staircases connecting every level. Fighting between Mujahideen forces occupying Kabul within the 1990s left the building in almost total ruins with large portions of the ceiling collapsed and therefore the interior receptive the weather. A proposal to rebuild it has so far come to nothing but its walls still hold the last century of Afghan history: the magnificence of its dreams, the breadth of its bloodshed and terror, a testament to the remarkable persistence of hope in the end. The palace was fully redesigned in 2019 for the 100th anniversary of Afghan Independence, on 19th August 2019.