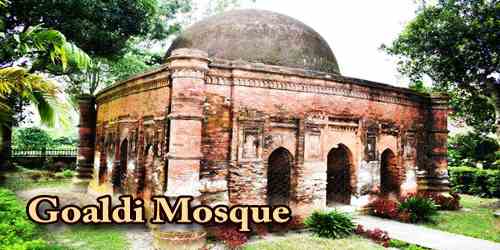 The Goaldi Mosque (Bengali: গোয়ালদী মসজিদ) is a good example of the ‘enclosed square type’ mosque of Bengal that is distinguished by a cubical prayer chamber with corner towers and entrances on all sides except the qibla wall. It is a mosque situated in Sonargaon ‘s historic Bengali capital. It is a good example of pre-Mughal architecture and is one of the few remnants of the sultanate era. About six km northwest of the microscopic township of Panam, near Sonargaon in Narayanganj district, there are two such precariously surviving old single-domed mosques within the sequestered hamlet of Goaldi, virtually hidden behind thick bamboo brakes and clusters of mango and jackfruit groves. The mosque was built during the Bengal Sultanate under the reign of Sultan Alauddin Hussain Shah. It’s one in all the few surviving medieval monuments in Sonargaon Upazila, Bangladesh. One dome caps the mosque; the four corners are defined by engaged ribbed towers, and the cornice is gently sloped too. Circular corner towers block the same old octagonal corner towers. This is often the sole example of circular corner towers within the Dhaka district. Accentuating the cornice may be a row of small niches with floral motifs inside.

The mosque was established in 1519; built according to an inscription by Mulla Hizabar Akbar Khan on 15 Shaban in 925 AH, during the reign of Sultan Alauddin Husain Shah, son of Sayyid Ashraf ul Husaini. The cubical prayer chamber measures 7.57m and the walls are 2m thick. Within the prayer hall are several ornamental black stone pillars for supporting the roof. The eastern façade has three arched openings, embellished on either side with delicate relief work rectangular panels in the shape of a niche with an ornamental hanging lamp motif. The north and south facades similarly display three arches, though only the center arch is open while the two side arches are blind. The dome is borne on squinches, two on each wall, springing from the tops of stone pilasters. There are three mihrabs to the qibla wall. One traditional practice during the sixteenth century was the use of black basalt for the central mihrab. It is decorated with elegant, intricate designs consisting of an ornamental lamp motif hanging on. The two flanking mihrabs are decorated in a similar fashion but rather than black basalt they’re manufactured from brick and fine earthenware work. Lotus motifs are found carved within the spandrels and are closely associated with the lotuses held by the Hindu god, Surya. The condition of the mosque had deteriorated: with the exception of the qibla wall the whole mosque had collapsed, including the dome. The Department of Archaeology and Museums carried out a thorough restoration and this small elegant mosque has now been restored to match its original configuration. The Goaldi Mosque is a memory of our history which still remains among us and it should be properly maintained without changing anything.