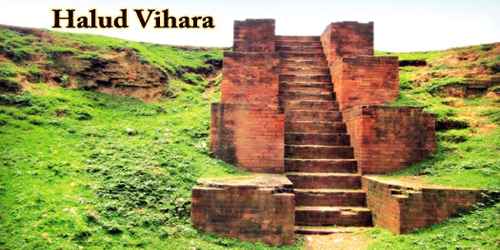 Halud Vihara, a famous Buddhist monastery, located between the Tulshiganga and Jamuna rivers in Vilasbadi Union of badalgachhi Upazila, 14.5 kilometers (9.0 mi) west-southwest from the World Heritage Site of Somapura Mahavihara, at Pahapur in the Naogaon District of Bangladesh. A large mound 100 feet across and 25 feet high is the principal monument of a Buddhist archaeological site contemporary with the existing World Heritage Site of Paharapur, to which is proposed to be added as an additional Monument Zone as part of a serial nomination. Associated with Raja Haladhara and Sonavan in local legend, the site has been the findspot of stone and metal images, terracotta plaques, ornamental bricks, etc. There are many scattered ancient mounds at Halud Vihara village. These remains occupy a large area, but they have been considerably encroached and destroyed by local people. This entire village, also locally known as Dvipganj, is profusely littered with old bricks, potsherds, and other cultural debris. These old mounds and the name of the village suggest that there are remains of a flourishing ancient Buddhist settlement.

Various antiquities such as stone and metal images, terracotta plaques, ornamental bricks, etc. were reported from the place in the past. Ancient building remains are visible all over the area, particularly concentrated around the village hat, which occupies a large flat open area in the middle of the village. The main feature of the site is “a large mound 100 feet across and 25 feet high”, but there are other mounds and remains of brick structures. Some sculpture has been removed from the site, which has also suffered considerably from the local inhabitants removing bricks for reuse. It is located at Halud Vihara village, which is also locally known as Dvipganj. Excavations show that it was an early Medieval Buddhist site, from a similar time period to Somapura Mahavihara and to the Sitakot Vihara in Nawabganj Upazila of Dinajpur District. The site was excavated by the Department of Archaeology (DOA), at first in 1984 and for the second time in 1993. The digs revealed the remains of a temple complex, consisting of a solid square structure with 5.8-meter sides that was probably the base of a stupa, two unequal oblong rooms, a staircase, and part of an enclosure wall. A number of interesting artifacts and objects of daily use have been unearthed from the site. The finds include earthen pots, pans, metal images, terracotta plaques, and ornamental bricks.

A prominent landmark in the village is a large mound situated west of the hat or the market place, about 30m long and 7.5m high from the surrounding ground. The most serious damage to the site was caused by a local family who, while building their house on its southwestern corner, removed about 7m thick habitation debris with solid brick walls, thereby virtually destroying a quarter of the mound. The Halud Vihara site clearly indicates the existence of a rich Buddhist settlement from the early medieval period, coeval with the ruins of Paharpur and Sitakot in the Varendra region. Buddhism originated between the 6th and 4th centuries in India, from where it spread through much of Asia, including Bangladesh. But it is unfortunate that local people are constructing houses on the southeastern corner of Halud Vihara. Certainly, this is a clear threat to the preservation of this heritage site. In February 1999, DOA submitted the details of Halud Vihara to UNESCO for enlisting the ancient monastery as a World Heritage Site. It is currently on UNESCO’s tentative site list for the status. A number of interesting antiquities and objects of daily use have salvaged from these sites. Also found here are earthen pots and pans. These include inscribed terracotta sealings, ornamental bricks, and a number of fragmentary terracotta plaques depicting human figures. Among the stone objects, a pedestal of an icon, a cast of a mould of ornaments, and grinding stone are notable.