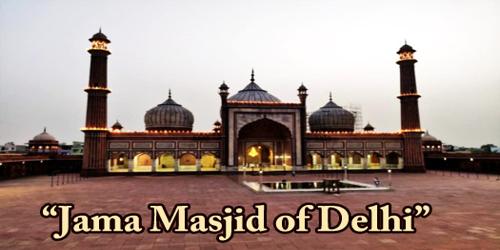 A Visit To A Historical Place/Building (Jama Masjid of Delhi)

The Masjid-i Jehan Numa, commonly known as the “Jama Masjid of Delhi”, also spelled Jāmiʿ Masjid, is a mosque in Old Delhi, India, constructed in 1650–56 by the Mughal emperor Shah Jahān, a noted patron of Islamic architecture whose most famous work is the Taj Mahal, in Agra. This is one of India’s biggest mosques. The longer name, Masjid-i Jahānnumā, translates to “world-reflecting mosque” or “world-displaying mosque.” The mosque was completed in 1656 AD with three great gates and two 40 meter high minarets built with red sandstone strips and white marble. More than 25,000 people will lodge in the courtyard. This was the largest mosque in the subcontinent at the time of its building and today it is surpassed in scale only by Lahore’s Friday Mosque, Pakistan. Due to its magnificence and size, the Jama Masjid (Mosque) of the metropolis is usually thought to be the apotheosis of Indian mosque design. Jama Masjid, now the second-largest mosque on the Indian subcontinent, is additionally a powerful example of Mughal architecture.

Jama Masjid is the main mosque in Delhi, the place where the Muslims of the city traditionally gather for communal prayer on Friday; Jama Masjid is Arabic for “Friday Mosque,” completed in 1656 AD (1066 AH). The mosque was inaugurated by Imam Syed Abdul Ghafoor Shah Bukhari, from Bukhara, Uzbekistan, on 23rd July 1656, on the invitation from Shah Jahan. About 25,000 people can pray within the courtyard at a time. Allami Said and Fazl Khan overseeed the construction. The mosque is next to Red Fort, yet another of the buildings of Shah Jahān. Jama Masjid and its courtyard are standing on an outcrop more than 30 steps higher than the street, giving the mosque a spectacular view of the city. The mosque resembles earlier congregational mosques in Delhi, characterized by two parts: a main hall of prayer and a large cloistered courtyard that precedes it to the east. The mosque is made on a red sandstone porch, which is about 30 feet (9.1 m) from ground level and spreads over 1200 square meters. The dome is flanked by two lofty minarets which are 130 feet (40 m) high and consists of 130 steps, longitudinally striped with marble and red sandstone. The minarets accommodate five storeys, each with a protruding balcony. The adjoining edifices are stuffed with calligraphy. The primary three storeys of the minarets are fabricated from red sandstone, the fourth of marble, and therefore the fifth of sandstone. The mosque is separated from nearby roads and therefore the dense city fabric by open lawns of about thirty meters comprehensive. Elevated approx. ten meters from the extent of town, the mosque contains a square courtyard (ca. 115 meters/side). The mosque is about 261 feet (80 m) long and 90 feet (27 m) wide. the most prayer hall (ca. 70 meters north-south by ca. 25 meters east-west) is found along the western side of the courtyard. Above the prayer hall’s entrances are calligraphic inscriptions in Persian. Three large marble domes rise from the prayer hall’s roof. The cupboard located within the north gate includes a collection of relics of Muhammad the Quran written on deerskin, a red beard-hair of the prophet, his sandals and his footprints embedded in a very marble block. In the 21st century, Jama Masjid was the site of two allegedly terrorist-related violent events. Today, Old Delhi’s Friday Mosque (Jama Masjid) continues to perform its congregational function, while the grand imperial gesture it represented serves as a reminder of the history of the region.