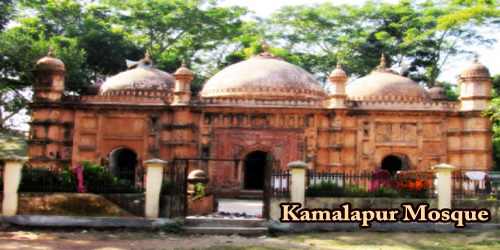 A Visit To A Historical Place/Building (Kamalapur Mosque)

Kamalapur Mosque (Bengali: কমলাপুর মসজিদ), also known as Masum Khan Mosque, is an oblong three-domed Mughal mosque and archaeological site in the village of Kamalapur in Gaurnadi Upazila of Barisal district, Bangladesh. It was built in the Mughal architectural style. The building was in utter ruins. In the late 1960s, a considerable portion of it was thoroughly repaired. In 1975 the Department of Archaeology, Bangladesh took it under its protection and undertook necessary repairs. According to local tradition, it was built by Masum Khan in the 16th century. The walls of the mosque are 1.83 meters thick, 17.22 meters in length to the north-south, and 8.08 meters to the east-west.

The central doorway, which is given prominence by a small projection bounded by octagonal turrets, is larger than the remaining ones. The qibla wall accommodates three semi-octagonal mihrabs, of which the central one shows an outward projection with bordering octagonal turrets. The octagonal corner towers, which now rise only up to the horizontal parapet level, must have originally gone beyond the roof to be topped by kiosks with cupolas, which could be a distinguishing feature of the Mughal architecture of Bengal. The inside of the mosque is split into three bays by two massive lateral arches springing from engaged brick pillars. Over the roof are three slightly bulbous domes on octagonal drums, of which the central dome is larger than its flanking counterparts. Domes are crowned with lotus and kalasa finials and supported below by the identical systems as within the Lalbagh Fort mosque at Dhaka. The decorations on the mosque are mainly of terracotta of the Sultanate type. The outside surface of the central archway is richly embellished and therefore the spandrels of the arch show curly scrolls enclosing large full-blown lozenge-bordered rosettes, while at the key point is noticed a kalasa motif. The enclosing rectangular frame of the archway is additionally full of terracotta plaques depicting types of motifs like floral scrolls, rosettes, and net patterns. The remaining part of the facade is marked with panels. The mihrabs are now plain accepting that their semi-octagonal apertures depict in their upper parts a rather projected band topped by a frieze of blind merlons. The cuspings of the mihrab arches are unique.