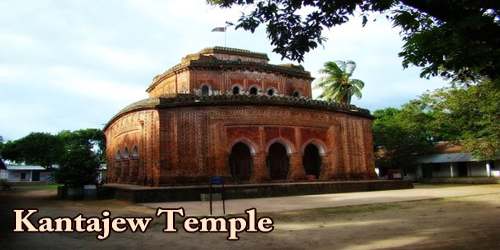 A Visit To A Historical Place/Building (Kantajew Temple)

Kantajew Temple (Bengali: কান্তজীর মন্দির) or Kantaji Temple, also known as ‘Kantanagar Temple’ at Kantanagar, is located in the graceful heart of the gorgeous countryside of Dinajpur, Bangladesh. It is a late-medieval Hindu temple in Dinajpur. This temple is a UNESCO world heritage site. This is a stunning block of religious artwork and is surely one of the most impressive Hindu monuments in Bangladesh. The Kantajew Temple is one of the most magnificent religious edifices belonging to the 18th century. The temple belongs to the popular Hindu Kanta or Krishna and this is most popular with the Radha-Krishna cult (assemble of memorable love) in Bengal. Built-in 1704-1752 A.D. by Pran Nath, a renowned maharaja from Dinajpur, and his adopted son Ram Nath, it is the country’s finest example of brick and terracotta style. Its most remarkable feature, typical of late Mughal-era temples, is its superb surface decoration, with infinite panels of sculpted terracotta plaques. It boasts one of the greatest examples on terracotta architecture in Bangladesh and once had nine spires, but all were destroyed in an earthquake that took place in 1897.

The temple is constructed on a high platform. This is often a Nava-ratna temple. The roof of the bottom floor and ground level each contains four sikharas or ratnas at their corners while the roof of the second floor in its middle contains the ruins of the central sikhara. The characteristic features of the erections are the four centered and wide multi-cusped arches, the plastered surface of the walls having immense rectangular and square panelings. The complete outer surface of the temple is exquisitely established with terracotta plaques which depict flora and fauna, geometric motifs, mythological scenes from the Ramayana, and also the Mahabharata, and therefore the contemporary social scenes and favorite pastime. There are also depictions of animated hunting scenes of wild games, royal processions of elephants, horses, camels, and dainty ox-carts of the nobility with their retainers in Mughal dress and arms. The idol of Kantaji is kept within the garvagriha of the temple in its ground floor. The department of Archaeology has been performing the required conservation and restoration works of Kantaji Temple since it had been declared a protected monument by the govt. in 1960. The deities are placed at a higher pedestal inside the temple, whereby the devotees only offer prayers from a distance. Every year on Janmashtami, the statue of Radha Krishna is taken by the boat through the river to Dinajpur to the King`s palace for two months.