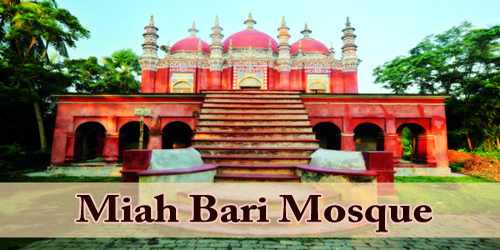 A Visit To A Historical Place/Building (Miah Bari Mosque)

Miah Bari Mosque or Korapur Miah Bari Mosque (Bengali: কড়াপুর মিয়াবাড়ি মসজিদ, Arabic: مسجد کڑاپور میاں باڑي‎) is an old mosque from the Barisal district of Bangladesh. It is a three-domed ancient mosque and archaeological site. It is located in Miah Bari, in the village of North Karapur in Raipasha-Karapur Union, Barisal Sadar Upazila. It is believed that the mosque was built during the 18th century. They have painted the mosque recently, and also doing some sort of restoration now. And thus it lost its antiquity entirely. The Mosque represents a typical Bengali platform mosque; that is, a three-domed mosque sits on a rectangular raised platform. According to local tradition, this Mughal architecture style mosque was built by Hayat Muhammad, the zamindar of Umedpur Pargana during the rule of the Nawabs of Bengal in the 18th century. Hayat Muhammad was rebellious to the British government and exiled to Penang Island (formerly Prince of Wales Island) in Malaysia. His family was stripped of Umedpur’s zamindarship. It was after Hayat’s return to Bengal, sixteen years later, in which he built the Miah Bari Mosque taking inspiration from the Kartalab Khan Mosque in Old Dhaka.

This mosque is built over a high plinth. Or, maybe it’s better to call it a high basement instead of a plinth. Inside the basement, it has several rooms at the ground floor. These days it is being used as a resident for the student of nearby Madrasa (মাদ্রাসা. There is a wide stair available to reach at the mosque that is at the second floor. It is a rectangular shaped mosque having three small-sized domes at the top where the middle one is slightly larger than the other two. Externally the mosque is a rectangle of 44’9″ x 21’5″ while internally it has an oblong plan of 36’9″ x 12’10”. The structure is divided into three equal interior bays, roofed over by three fluted, bulbous domes, resting on drums. The proportionately smaller lateral domes are placed on the equal size bays by splitting each dome into a half-dome and placing it on a pendentive. The mosque has a total of eight minarets with four at the front and four at the back sidewalls. Apart from these, there are several small minarets available in between. All the minarets and the upper portion of the mosque is highly decorated. At the eastern side of the mosque, it has a very large water pond. The eastern or main facade is visually divided into three sections. Each section contains an entrance doorway, flanked by its own pair of slender engaged columns. The entrances correspond to the three domes above and adorned by cusped arches. The western wall is internally recessed with three semi-octagonal mihrab niches, which are all arched. The larger central mihrab is projected outside having usual ornamental turrets. However, some believe the mosque was built by Muhammad Jahid, the son of Hayat, in 1704. The mosque is now under the protection of the Department of Archaeology. The mosque is located at the Uttor Korapur (উত্তর কড়াপুর) village. It will be better if visitors or travelers hire a battery-driven vehicle from Barisal town (বরিশাল টাউন. And the easiest road will be the Nobogram Road (নবগ্রাম রোড) from Barisal town (বরিশাল টাউন.