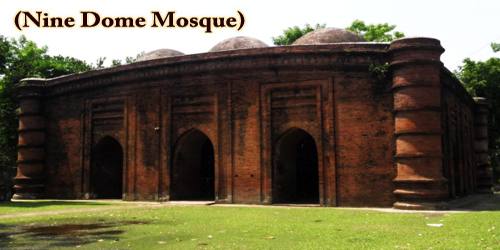 A Visit To A Historical Place/Building (Nine Dome Mosque)

The Nine-Domed Mosque is found on the western bank of the Thakurdighi, but half a km away to the southwest of the tomb-complex of Khan Jahan Ali. It’s a historic mosque within the Mosque City of Bagerhat in Bangladesh. It absolutely was built during the governorship of Khan Jahan Ali within the 15th-century, under the reign of the Bengal Sultanate. it’s a brick-built square structure measuring about 16.76m externally and 12.19m internally. The 2.44m thick walls on the north, south, and east sides are pierced with three arched-openings on each side; the central one, set within an oblong frame, is larger than the flanking ones. Supported type of architecture the date of construction is often estimated to be mid-fifteenth century. The mosque could be a multi-domed square type Sultanate mosque; that’s, a square structure crowned with nine domes. Its western wall conventionally faces west towards Mecca. Near this mosque are the Zinda Pir Mosque and Mazar (tomb), which are in ruins. the inside of the mosque is split into three aisles and three bays by two rows of stone pillars, two in each row, thus creating nine independent square bays, each of which is roofed with an inverted cup-shaped dome. All the nine domes are internally carried on four intersecting arches springing from stone pillars and brick pilasters attached to the side walls. The phase of transition for every dome is achieved by means of traditional Bengali pendentives.

The western wall or the qibla wall has three mihrabs, the central one being the largest. Chain-and-bell terra cotta motifs decorate the center of each mihrab. The round corner towers are faceted by eight bands of molding and the outer walls have tall vertical panels terminating in pointed arches below the curving cornice. The stone pillars, supporting the domed roof, have stepped square pedestals and capitals. Their shafts are octagonal and are separated from the pedestals and capitals by raised bands. The engaged brick pilasters have also stepped square bases and capitals with stone imposts on the top. The corner towers emphasizing the four exterior angles of the building are circular in the Khan Jahani style. All these towers, having molded bases and plain tops, do not rise above the roof level. The cornices are gently curved. It is close to Khan Jahan Ali’s Tomb. The walls of the mosque support a large central dome which has eight smaller domes around it. This structure was also plagued by sulfates. It’s since been substantially restored. Exterior façades are of plain brick texture with developed framed arched opening with horizontal rows of terracotta designs. All entrances are almost of equal breadth while the central ones are slightly taller. The decoration, wrought in terracotta, is now confined to the archways, mihrabs, corner towers, and cornices. On the skin surface the oblong frames, enclosing the archways, are enriched with net patterns. All the mihrabs are very richly decorated. Local tradition ascribes the building to one of Khan Jahan’s officers who had his residence nearby on the identical bank of the Thakurdighi. The mosque is now a protected monument of the Department of Archaeology, Bangladesh.