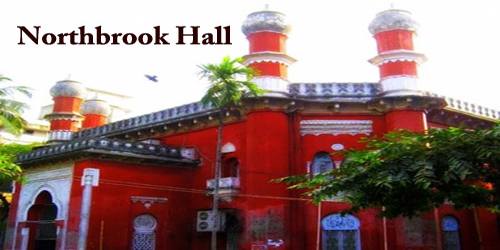 A Visit To A Historical Place/Building (Northbrook Hall)

Northbrook Hall, also called Lalkuthi (লালকুঠি), is situated at Wiseghat in Old Dhaka, Bangladesh on the bank of the Buriganga River. Over the British era, it was originally built as a town hall. This is an Indo-Saracen building and a synthesis of Mughal architecture and European Architectural Revival styles. The building was originally designed as a Town Hall and named after Viceroy of India (1872-1876), lord Northbrook. Later, it had been converted into a library to which a clubhouse was added and called Johnson Hall. On 8th February 1882, a library was added on the south-east side of the Hall. it had been named the Northbrook library and has become known for its literary collection. Many books were ruined during the 1971 Liberation War. The building’s semi-circular horseshoe arches contain the most entrance on the north side. On the north side, the four octagonal minarets, together with pinnacles and ornamental parapet, show the features of Muslim and Mughal. The gates, doors, and walls were painted in the European style but the domes at the top of the building were painted in the Muslim style. The deep red color of the grand monument with its graded roofs, pinnacles, and parapets presents a magnificent view from the riverfront.

A clubhouse was added to the south-side and called Johnson Hall. At Northbrook Hall, Nobel Laureate Poet Rabindranath Tagore was honored by Dhaka Municipality and therefore the People’s Association on the 7th of February, 1926. In 1950, the Northbrook Hall was used as a telegram office, later as Central Women’s’ College. Afterward, since this very day, this building may be a property of Dhaka Municipality Corporation. The building, however, has lost its attraction now due to the new structures like assembly halls and community centers that are inbuilt identical premises and surround it from all sides. However, because the building is quite 130 years old, on few instances, comparatively major restoration building has been actively in use for over a century, only minor restorations were required works were required, especially for the condensation of the plasterwork and paint. The users of the building took partial responsibility of the minor restoration works under the supervision of the Department of Archaeology. The Northbrook Hall is considered one in all the more successful formal conservation projects undertaken by the Department of Archaeology. One of the main challenges to the heritage building is the intrusive buildings, including an assembly hall and several community quarries constructed around the building. Another critical factor is the ‘List of Protected Heritage’ published in 2009. Before the list was published, the collaboration between the local community, Dhaka Municipal Corporation, and the Department of Archaeology was flexible.