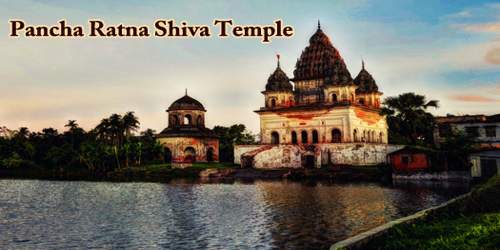 A Visit To A Historical Place/Building (Pancha Ratna Shiva Temple)

Pancha Ratna Shiva Temple, also known as Bhubaneswar Shiva Temple is the largest Shiva temple in Bangladesh. It was built in 1823 by Rani Bhubonmoyee Devi, the widow of Raja Jagat Narayan Roy; it overlooks the Shiv Sagar Lake. It is a Hindu temple of the Puthia Temple Complex in Puthia Upazila, Rajshahi Division, Bangladesh. It is the largest Shiva temple in Bangladesh. The shrine overlooks the Shiv Sagar (Shiva’s lake) to its left. The temple is well decorated in Pancha Ratna (five spires) architectural style and is located at the entrance of the Puthia Rajbari. Among the surviving Hindu temples, this shrine is said to be “an exceptional and more attractive for its architectural beauty” in Bangladesh. Temple Architecture construction of ‘Mandir’ or ‘Temple’ in India started nearly 2000 years ago. The oldest temples that were built of brick and wood no longer exists. Most ancient and medieval stone temples still survive. Structurally, ‘mandir’ (temple) marked the transition of Hinduism from the Vedic sacrifices to a religion of Bhakti or love and devotion to a community or personal deity. There are substantial differences in temple architecture in different parts of India and South Asia. The temple is in Puthia town which is 32 kilometers (20 mi) away by road from Rajshahi city; the city is also a railhead and is on the Dhaka Rajshahi Highway.

The temple is a square shape, 19.8 m (65.0 ft) on the side, with a height of 35 m (115 ft), This ornate temple is an imposing and excellent example of the five spire style (Pancha Ratna) temple architecture common in northern India. The corridors have a touch of Jaipuri architecture and in the sanctuary, lays very large black basalt Shiva Lingam, the largest in the country. It is decorated with stone carvings and sculptural works, which were disfigured during the Bangladesh Liberation War in 1971. The invading Pakistani army attempted to displace and break the Shiva Lingam but was unable to move it from its position. The temple is now a protected monument. A giant black-stone phallic representation of Shiva is set inside. At present-day many Hindu devotees come here to offer puja early in the morning and in the evening. The temple is now a protected monument. The corridors have a touch of Jaipuri architecture.